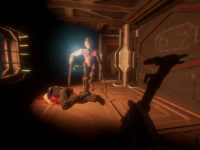 Talk about a huge wait here, as we have the announcement that Syndrome will be making the leap from the PS4, Xbox One, and PC over to the Switch soon. It has been about five years since Camel 101 gave this survival game to us and now it looks like they are getting RedDeer Games into the mix to bring it out there again. Just so some of us can take Syndrome on the move a bit more than we have been able to before. That and not bring the traditional style of video game to us all on the platform here. Now we just have to wait to see when it will be making that leap in and terrifying a few more out there.

Since there has been a bit of time since Syndrome dropped out there, here is a bit of a rundown on what is going on in the game. We wake up from a cryosleep on a spaceship to find it mostly abandoned. I say mostly as it looks like there is something darker roaming around and hunting us while kidnapping and killing everyone else. It could also be you going through some other nightmares after waking up. It does fit into the horror side of things more for Syndrome based on the name. Granted, it is an easy Google search to find out at this point, so it will definitely all need to boil down to the gameplay we have in the mix more than just the story.

You wake up from cryosleep spaceship. There are no people around, but suddenly you hear a voice on the communicator that makes you aware of the situation. Something from the abyss of space is kidnapping and killing the people on the ship. And it doesn't stop hunting.

Face dangers and your own nightmares as you explore doomed starship in Syndrome — a sci-fi survival horror.

Did you play Syndrome way back in the day or will you be giving it a go when it hits the Switch? Have you been able to dodge all of the story spoilers out there or will you just be looking it up to make it a little less frightening? Will we see a full next-gen update for the game in the future or will that be something far-off for now? Let us all know down in the comments and then feel free to discuss it all. If there is anything more for Syndrome, we will drop it all here for you. Just keep checking back for all of that and much more.