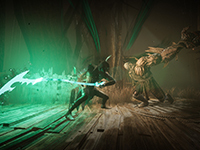 There is one more title to add to the tally for the delays out there with Thymesia getting pushed out from its original December release date. It looks like OverBoarder and Team17 need more time with the game, but for some solid reasons here. The biggest being that Thymesia is no longer going to be just a PC title, but it will also be heading to the PS5 and Xbox Series X|S when it launches in 2022. My guess is that this delay is to make sure that all players out there have the same opportunity at the same time to be able to experience what this action RPG will be placing out there. It usually does defeat the purpose for something like this to have a staggered release schedule and now we can all look forward to it at the same time. Also, after the holidays when so many gamers should be getting those new systems out there to play around with.

Along with this delay announcement for Thymesia, though, also comes a bit more gameplay to take in and enjoy for the game. None of it is too mind-breaking or spoiler-filled, so do take a look and see what the game does have to offer up. There is going to be a bit more of a wait for Thymesia, so we might as well to help pass the time. I know I just hope that this is an early 2022 type of release given how close some were to getting it on Steam here. It would be pretty harsh to have to wait until the end of 2022 to add it into the rotation of titles you are experiencing and enjoying out there. I have a feeling we might get that new date on the day that the game was supposed to launch, though. Do not quote me on that for now.

Team17 and OverBorder Studio have announced that punishing action RPG Thymesia will be launching on PlayStation 5 and Xbox Series X|S alongside PC in 2022. Set in a hauntingly beautiful world, Thymesia follows the mysterious half-human, half-raven Corvus as he tries to piece together his lost memories in an attempt to save himself and the kingdom he once called home. With punishing combat focused on Corvus’ ability to steal enemies’ plague weapons and use them for himself, perfect parries, dynamic dodges, and aggressive attacks are at the core of the challenges Thymesia has to offer.

A kingdom once thriving on the power of alchemy enters an age of calamity. After discovering the price behind alchemy, an attempt to stop the use of it backfired. Within a few days, the kingdom was in chaos and the streets infested with monsters.

The key to understanding all of this is in Corvus’ hands, but he has lost his memory. The truth can only be found within his memories, but every time he dives back in, he only finds more secrets.

Were you looking forward to Thymesia releasing in a few weeks or was it still under your radar here? Do you think it is a good move to launch the game on all platforms at the same time or would a staggered release be your preferred option? When in 2022 do you think that it will finally launch out there and will it be earlier in the year more than anything? Let us all know down in the comments and then feel free to discuss it all if you so wish. We will keep the news for Thymesia rolling out to you as best we can, so keep checking in on the site for all of that and much more. I do hope that we have a lot more to share in a shorter time.