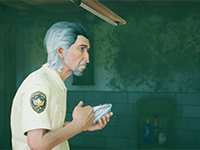 Things are progressing right along for Alfred Hitchcock — Vertigo and here we are with yet another developer diary to help us see how this little title is shaping up for the PS4, PS5, Xbox One, Xbox Series X|S, Switch, and PC. Pendulo Studios only has until December 16th to get things done still, so they have to be in the home stretch. I have a feeling this is why we are getting a new update on the art and style of Vertigo here today. This does feel like it would be one of the final tweaks and changes that the team could do for the game. It is also a nice way to hyp up some of those Hitchcock fans that are going to hold the game to a certain level no matter how we slice things out there.

As is to be expected here for Vertigo, while the developer is taking their own character and world design to task, they are also using lighting and framing techniques that the famed director used in the film and other projects. Sometimes something as subtle as a color light or fog can change the feel of an entire scene, and they have tried to recreate what was done so long ago. Granted, this is their own take on the story and the way things play out, so do not expect to see a shot-for-shot recreation of Vertigo, but the essence should still be there. If you are concerned at all about this, then have a look at the developer diary here and see if it will put you to any kind of ease as we wait for the final game.

Ed Miller, a writer, came out unscathed from his car crash down into Brody Canyon, California.

Even though no one was found inside the car wreckage, Ed insists that he was traveling with his wife and daughter. Traumatized by the event, he begins to suffer from severe vertigo. As he starts therapy, he will try to uncover what really happened on that tragic day.

Prepare yourself for a most disturbing investigation inside the human mind: truth is sometimes worse than madness.

Did you realize that Vertigo was this close to launch or have you been counting the days? Do you like that they are aiming to do what Hitchcock did so long ago or would you rather have a fresh start to it all? Do you think that the character designs will take away from the overall experience given the grounded nature of the other elements being mixed in? Tell us all of those thoughts and then more down in the comments and then feel free to discuss it all. We will have more for Alfred Hitchcock — Vertigo, and when we do, it will be here on the site. Please keep checking back in for all of that and much more as we get closer to launch.