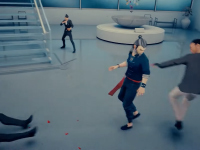 We have had a whole lot of release date shifts as of late and we have a new one here for Sifu we have to take in. The good news here is that Sloclap has seemed to perfect the game a bit earlier than expected and we will get the game on the PS4, PS5, and PC a bit sooner now. How soon? Well, it looks like the new release date for Sifu is set down as February 8th now. That is a few weeks earlier than expected, so be sure to mark the calendars correctly and get those pre-orders ready to dive into the game here. It is always a bit of good news to hear when a developer is this confident in their product for us to enjoy.

On top of getting the new update for the release for Sifu, we have a few more gameplay videos to look at that better explain some of the gameplay mechanics we will have in the mix too. One of the big ones being the combat system and how it will flow in the game. At least partially as the team does want to keep some things hidden for the game's launch. It does all feel like it will flow with the normal combo systems that we have had before with Sifu using a balance and focus meter in the mix. The balance being how well your defenses, or the enemy, defenses are up before being able to unleash finishers. The focus side is a gage that will fill up to lead into some harder hits that can fully sweep enemies off their feet. It looks like it will flow just as well as the team was hoping for.

We are pleased to announce that Sifu will be released on the PlayStation Store on February 8th, 2022. We have made good progress on getting our game ship-ready and we are excited to be able to launch Sifu two weeks earlier than anticipated. To celebrate, we have prepared two brand-new gameplay videos that will be revealed today.

Do you have what it takes to know Kung Fu?

Embark on your path of revenge on the 8th of February 2022 on PS4, PS5, and the Epic Games Store.

Building on our experience working on martial arts gameplay with Absolver, but focusing this time on a single-player game, we wanted with Sifu to offer a unique player experience, heavily drawing from Kung fu and martial arts movies. In this short overview, we introduce players to Sifu's main combat gameplay mechanics.

The other video for Sifu has to be the one that has had many of us wondering what was going on with the game and the age shifting. As it turns out, this is a mechanic in the mix that helps with how many times we can "die" in the game with our age advancing a bit more each time. All until we hit that final age where we do not get to come back any more. The interesting part of this is that we will be able to carry over all the intel we collect along the way in Sifu to help if we do meet a final death. Sadly, we do not get to carry over any of the training (skills) we pick up. Given that aging is how this is done, it looks like we will have a hefty fight on our hands when the game does launch.

Kung Fu as a martial art carries the concept of endless self-improvement, of a mastery kept alive and relevant by permanent practice. In that sense, a single life is never enough to know, or have, Kung Fu. In this short gameplay video, we want to answer the many questions we got on Sifu's progression system and to introduce players to the death and aging mechanics.

How excited are you that we will be seeing Sifu hit us all a bit sooner than expected? Do you think the combat will stay as free-flowing as the video shows or will we always go to the dodge instead of the block? Do you think the aging system will work out well or will we need to keep dying to make sure we have the skills we need in the game and thus make it all harder in the end? Let us all know what you are think about this down in the comments and then feel free to discuss it all. If we have more to share for Sifu, we will add it to the site for you. Just be sure to keep checking back in for all of that and much more as we get closer to the launch.