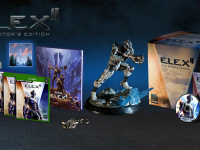 I do hope that you love getting those Collector's Editions of video games out there, as we now have a new one to add to the list for ELEX II. A game that I did not think we were going to get in the first place from Piranha Bytes, but now know that we will see it in its full light on March 1st for all of the platforms. Now with a way to show you had faith in the ELEX line by picking up the new collector's edition and all of the physical goodies that will be mixed in. If you have picked up any from the publisher in the past, you know that you could be in for a massive treat here once more.

As is expected here for ELEX II, we will have the soundtrack, concept art, and artbook in the mix of things. For those true collectors out there, though, we also will see a nice new statue in the mix and a key chain that you can add to the things that you carry around. More or less, the standard affair for ELEX II and these kinds of collections out there. Even if this is one of the smaller titles out there that do not seem like they should normally be getting a collector's edition of items. They need to make money somehow and these usually get gamers all amped up so they do not miss out. I know I have a few collector's boxes out there that I probably did not need.

The Skyands are preparing to launch their attack on March 1, 2022! Get ready to defend Magalan with the ELEX II Collector’s Edition.

How do you feel about this collector's edition for ELEX II and is it something you can see yourself spending money on? Is it odd to see the publisher pushing these things out for games that are not as massive in the zeitgeist currently or will this be how that changes? Do you usually add the keychains or other items into your rotations when you get these editions or do they stay as decoration in the house and nothing more? Let us all know down in the comments and then feel free to discuss it all as you so wish. More for ELEX II will be here on the site. Just keep your eyes open for that so you do not miss out on a single thing.