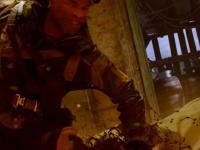 The main team for Call Of Duty: Vanguard is here to be highlighted with some other Call Of Duty Halloween fun mixed in

We are just a few weeks out from Call Of Duty: Vanguard hitting us all on November 5th now, and it is time to get to know our team just a bit more before then. A team that we will have to help with our own skills in the game on the campaign and multiplayer side of things. Sledgehammer Games is giving us a rounded cast of characters that come with their own set of skills in this Call Of Duty, so we might as well get to know them. Even if it does all boil down to the various skills that each will bring to the team in general. Skills that translate over to the specific shooting types that they all are.

Here we get to look at Arthur Kingsley, Daniel Take Yatsu, Padmavati Balan, and Polina Petrova in this Call Of Duty. The leader, support, ground stealth, and sniper characters respectively. All of which will need to hone their skills together for us to progress and win the war once more. Even if it does look like the team is not specifically fighting together in any of the scenes we have here. It does offer up some new Call Of Duty: Vanguard gameplay a bit, so that is at least a little fun to look at.

Speaking of fun to look at, we also have a fun little experience out in London for the Call Of Duty: Vanguard Zombies side of things. Given the Halloween season, we have included it for you to see what you may have missed out there. Just a little wall of Nazi Zombie heads that anyone in the area could have walked by and interacted with. Maybe it was a bit too scary for some. I could also have been a bit too bloody for others. Given the Call Of Duty roots, it makes sense. If you want to see some humans getting scared beyond belief, have a look further down to see all of that fun.

Meet Arthur Kingsley, the heart and leader of Task Force One. Fight as, and alongside, Arthur in both the single-player Campaign and in Multiplayer on November 5.

Meet Daniel Take Yatsu, a protector who uses his marksmanship to support his fellow soldiers. Fight as Daniel in Multiplayer on November 5.

Meet Padmavati Balan, a character who is defined by the duality between fighter and peaceful civilian. Fight as Padmavati in Multiplayer on November 5.

Meet Polina Petrova, a soldier not by choice but by a need to defend her country, who becomes an infamous sniper of legend. Fight as, and alongside, Polina in both the single-player Campaign and in Multiplayer on November 5.

The Call Of Duty crew zombified a street in London to celebrate the upcoming release of Call Of Duty: Vanguard on November 5th and to play a gruesome prank scare on the general public. Happy Hunting…

Which of the characters do you think you will be heading out with more than not here? Do you think they will all be on solo missions all the time or will we see the team roll out and take up that call of duty that the title points us at? Would you have liked to experience this little Halloween fun here or is it good that it was very localized and away from you? Let us all know down in the comments and then feel free to discuss it all if you so wish to. We will keep sharing all of the Call Of Duty: Vanguard fun that we can out there. Just keep checking back in for all of that and much more so you do not miss out at all.