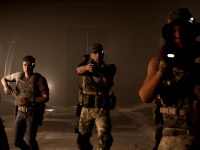 The Dark Pictures Anthology: House Of Ashes will offer us all a fun cast of characters to try to survive the horrors within the House Of Ashes

One of the biggest aspects of the The Dark Pictures Anthology so far has been the cast that Supermassive Games pulls together to give us some great performances and this is the case again in House Of Ashes. Well, that has been the assumption so far with how it has gone for the other titles the team has put out. We have also had the showing of one of the headliners for this one in the past too. Now we are back to get the full scope of things for The Dark Pictures: House Of Ashes with a look at the full cast bringing the characters to life here. Even if it all still boils down to having one character in the middle with a solid supporting cast. Now we just have a chance to see who all of them happen to be before the October 22nd release date.

This might not be the most interesting piece of news for those that just want to play and enjoy House Of Ashes here, but it does house a few other things in the mix. First, this does come with some new gameplay to look at and story beats to catch with some of the characters involved. Second, it shows that we will not have to worry about just one of the creatures in the cave but a whole pack of them. This will most likely explain some of the supernatural elements that we have seen in the past trailers for House Of Ashes that could have been something demonic. Now it is just feeling like a bunch of humans that are placing a supernatural element on a "Real" horror to help explain what is going on. This is quite a juxtaposition from the others in the line if it is true, and I am glad to see it happen finally.

“Hell is empty, and all the devils are here”

Introducing the cast of House Of Ashes. All can live, and all can die.

The Dark Pictures: House Of Ashes is coming to PlayStation 4, PlayStation 5, Xbox One, Xbox Series X|S, and PC on October 22.

Do you care about the people playing the roles in House Of Ashes or any of the other titles in the line? Does it all still boil down to the way the story is told and the various gameplay segments we have in the mix for you? Do you think this will weirdly be one of the stories that will be a bit more grounded in things or will that be something that will be pulled out from under us at some point here? Tell us all what you are thinking down in the comments and then feel free to discuss it all as you so wish. We will share what we can for The Dark Pictures: House Of Ashes leading up to and beyond the release of the game. Just keep a close eye over here to be able to see and hear all of it as it comes out.