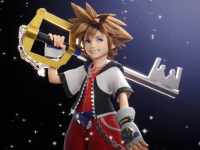 Another era is coming to a close, as we have the final DLC character for Super Smash Bros. Ultimate get the reveal and get fans all stirred up. It looks like Sora will be crossing over to bring Nintendo, Square Enix, and Disney all together in one little bit for us to enjoy. Not that we have not seen other things like this in the past for Super Smash Bros., but this is the one that locks it all in. Now we just have to wait for it to load on the Switch so we can see what this new fighter will bring with the keyblade in tow. I would like to think that it will be featured more than just to give us some iconic looks for it all. Stranger things always and do happen, though.

Now that we have the character announced for Super Smash Bros., it is time to have a quick look at how Sora will function. Well, slightly, as this announcement comes with a highly stylized version of things that does look to be gameplay but from angles that are not true gameplay. Even to the point where it looks like we will have Sora getting the ability to call down various elements from the Kingdom Hearts IP into the Smash Bros. universe too. Maybe we will get some explanation as to why that can all happen here, but I have a feeling that it will just be brushed aside to let the fighters do what they all do best here. All in all, this is a great way to go out on top while we wait for the next title in the line to get announced for us all.

Did you think that you would see Sora or any of the Kingdom Heart characters make it into the Smash Bros. line officially? Do you like how it looks the blending will go down or is it a little fuzzy beyond us knowing the character is coming over? Do you think this crossover will open up for something further down the line or will this be it given the various IP holders that had to be involved for this? Let everyone out there know what you are thinking down in the comments and then feel free to discuss it all as you will. We will share more for Super Smash Bros. Ultimate if there is anything, so please keep checking back in for all of that as it comes.