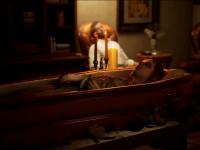 It looks like things are being placed out there to secure the setting for Martha Is Dead. It is not something I personally thought of from the jump, but it looks like LKA is giving us no doubt now that it will be taking place during the Second World War out there. An era that is always the biggest rage to have your game in and Martha Is Dead is joining those ranks. I guess looks can and will always be deceiving when it comes to the teases we have for our video games and this is a great example. Now we know so when the demo for the game hits us tomorrow (10/1) we will not be surprised. I guess this also goes for those waiting until the game hits all of the platforms before the end of the year too.

Not only do we have this for Martha Is Dead and the following trailer, but it looks like we have a bit of casting news in the mix of things too. It looks like Udo Kier (Far Cry, Downsizing, Call Of Duty: WWII) will be lending a voice to the game as Wermacht General and our Protagonist's father. A solid voice for the time and era of Martha Is Dead given everything. Not to mention that the voice will also be in Italian, English, and German to make sure that everyone has a chance to enjoy the work in their own native tongues, if possible. Have a look at the latest we have and then give that demo a try tomorrow until it goes away on October 7th.

It’s 1944, and a war that for so long seemed so far away is now creeping ever closer to home. As the Allies fight their way up the spine of Italy, Giulia has to battle her demons following the death of her twin sister Martha, just as her father, an officer in the Wehrmacht, now finds himself on the front line…

Martha Is Dead is an upcoming psychological thriller — developed by LKA studios, award-winning creators of The Town Of Light.

Did you have a feeling that Martha Is Dead was going to be set during this time and place or is this news to you? Why do you think we always keep coming back to this point in human history and will we ever fully tire of it? Does the voice actor help make or break the game for you or will that need to be heard to fully be able to judge? Tell us what you are thinking down in the comments and then feel free to discuss it all if you so wish. We will share more for Martha Is Dead as we get it and maybe a bit of the demo if we can. Just be sure to keep checking back in for all of that and much, much more.