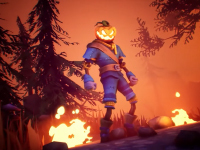 We assumed it was going to happen and now we have official word that Pumpkin Jack will be getting that full PS5 and Xbox Series X treatment. All of which will be just in time for us to dive back into the game over the Halloween period. Headup Games is looking to offer us all this upgrade or new version of Pumpkin Jack on October 27th, so get those systems ready for the hellspawn to crawl up once more. It is the season and given that the game launched around the bridging time for the consoles, it makes complete sense that we would be getting this once more. Not to mention that it was a fun game to behold even before all of this.

Before we all get too excited, Pumpkin Jack does hail from a design that revels in the PS2-era visuals of gaming for it all. Do not expect to see anything groundbreaking in that department. We will just be able to platform our way through the world natively on the new systems if we already own the title or are looking for a new one to add into the mix. Pumpkin Jack is still a fun title with all of that said, you can read our review on the site, and it will just be nice to see it in its most recent final form. You can have a look below at the announcement, but do note that we did warn about the visuals before you think you are going to lose your gourd.

Pumpkin Jack is coming to PS5 and Xbox Series X|S on October 27th, ideal for Halloween!

Featuring Cross-Buy: If you already own the game on PS4 or Xbox One, you’ll automatically get access to the PS5 or Xbox Series X|S New-Gen Edition at no extra cost!

Pumpkin Jack is a Spooky Scary 3D platformer in which you embody Jack, the Mythical Pumpkin Lord! Dive into an Epic Adventure through otherworldly landscapes and help the Evil annihilate the Good!

Travel through epic and dramatic settings, with each level having its own eerie atmosphere. Using a vibrant palette and high-quality lighting effects, Pumpkin Jack invents its own unique cartoon universe inspired by the classic PS2 graphic style.

You will have to master the arts of dodging, timing, and movement to vanquish Jack's foes. During the dynamic real-time battles, choose which weapon you want to use and strike at the critical moment! Solve puzzles that focus on physics, gravity, and reflection. Inhabit a pumpkin head and burn books, hammer some moles, create a path for magic spheres… But also more!

Did you have a chance to enjoy Pumpkin Jack before now or will you be jumping in with the next-gen release? Do you think it fully matters to have this release given the visuals or will there be something hidden in the mix we do not know about? What new features are you hoping will be in there for Halloween and what is the likelihood of that happening? Tell us all that you wish to down in the comments and then feel free to discuss it all. If there is more to share for Pumpkin Jack, we will certainly offer it all up here for you. Please keep coming back to the site to see and hear all of it as we are able to release it.