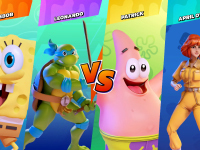 The fighting has begun in Nickelodeon All-Star Brawl with so many different matches getting tossed out there for our enjoyment. We still have to wait until October 5th to be able to put them all to the true challenge, but Fair Play Labs is at least willing to give us all a bit of a taste for it all. Quite a bit of a taste for now with a few of the Nickelodeon characters making the rounds in the latest gameplay we do have. All so we can see how the matches will flow and just what we will have to do to throw our opponents of the platforms. That is still the style of game that this will be with all of the characters most of us grew up enjoying.

As you will be able to see, Nickelodeon All-Star Brawl uses the same style of gameplay that we have seen in this genre for a while now. Each character will have a different set of Light, Heavy, and Special attacks that will hit the High, Mid, and Low ranges. All of which can also be performed in the air with slightly different looks and movements. This will all be done so we can build up our opponent's percentage meter to be able to push them further off the map with each hit. All to be able to knock off all of their lives and be the last one standing. More or less the same if we are going into Nickelodeon All-Star Brawl with a 1v1 or 4-player brawl in the mix. Have a gander and see some of the various matches we will get to enjoy.

Join developer Thaddeus Crews as he walks you through some of Nickelodeon All-Star Brawl's core mechanics.

Check out a 1-v-1 brawl between CatDog and Lucy Loud in Nickelodeon All-Star Brawl.

Check out a 4-player brawl between SpongeBob, Leonardo, Patrick, and April O'Neil in Nickelodeon All-Star Brawl.

Check out a 1-v-1 brawl between Nigel Thornberry and April O'Neil in Nickelodeon All-Star Brawl.

In addition to all of these bits of gameplay, we have a character breakdown for SpongeBob to further explain how they will function in Nickelodeon All-Star Brawl. They follow the standard premise listed above, but now we can see all of the animations and moves a bit clearer than the chaos of a live fight. Just as one would assume, SpongeBob will be a well-rounded character for the newbies out there to get their feet wet with in the game. Presumably, some of the other Nickelodeon Stars will be a bit more on the difficult side to play with, but that is still yet to be seen. Even if it does look like CatDog will have some crazy variations since it will be like having two characters at once.

Learn all about SpongeBob Squarepants' moves and mechanics from Markus Villalobos, a developer at Fair Play Labs.

Were you expecting anything vastly different for Nickelodeon All-Star Brawl than the other titles in the genre? Does it look like any of these characters are a bit over-powered or will that still boil down to who is controlling them? How hectic will some of the 4-player matches truly be and will they allow for some players to have team-up attacks if they blend in the shows? Let us all know what you are thinking down in the comments and then feel free to discuss it all if you so wish to. There will be more for Nickelodeon All-Star Brawl, for sure, and we will drop all of it on the site as fast as we can. Just keep your eyes open for all of that and much more as we get closer to launch.