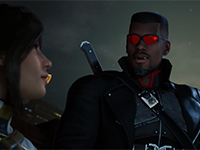 One of the bigger surprises out of gamescom this year had to be Marvel’s Midnight Suns. I do not think a single person outside of 2K Games and Firaxis Games knew it was coming and it was a major shock for so many. Sadly, it dropped and only had a nice cinematic trailer to give us all a feeling for what Marvel’s Midnight Suns was going to bring. All with the promise of gameplay yet to come and that it would be sometime in the coming week. I am guessing that someone could not hold back until then, as we have our first little taste of the gameplay to experience with the bigger showing still happening at its announced time. So much hype building around this and we still have to wait until March of 2022 to actually get to experience it all.

From the announcement of Marvel’s Midnight Suns, we knew it was going to be a tactical RPG, and it still is. We will get to move our characters from place to place on the map and have them perform their actions to try and stop all of the otherworldly threats coming. Now we get to see that there is a card-based system in play that will drive our special abilities and attacks in the game. Cards that also look like they will be able to be leveled up in Midnight Suns to do more. My guess is damage and nothing that will alter the core of it all, but that is still yet to be seen. Have a look at the small bit of gameplay that we do have just below and see if it is going to fit into what you were expecting. Then have the short wait until we have a larger version to assault our eyes.

Get your first glimpse into the gameplay of Marvel’s Midnight Suns. Heads are definitely about to roll!

Marvel’s Midnight Suns is a new tactical RPG set in the darker side of the Marvel Universe, putting you face-to-face against demonic forces of the underworld as you team up with and live among the Midnight Suns, Earth's last line of defense.

Was this about what you were expecting for Marvel’s Midnight Suns in terms of gameplay or do you think it was going to be much closer to XCOM? Do you think we will get to change some of the core for the cards or will it just be numbers in the background? Are you ready to see the two teased characters fight it out or will it be something that misses the mark? Let us and the world know what you are thinking down in the comments and then feel free to discuss it all. We will have more for Marvel’s Midnight Suns, and when that happens, we will share it here for you. Please keep an eye on the site for all of that and everything else that we still have yet to come.