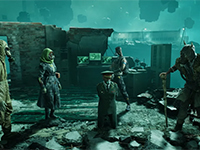 The Early Access run for Chernobylite is about to end out there with the game releasing on PC fully on July 28th. Not much longer now for some of us out there to see how The Farm 51 has shaped and changed the title since it was first announced and then the few extras we have seen mixed in too. It has been one ride for Chernobylite and it is almost over, unless you are looking for it on the PS4, PS5, Xbox One, and Xbox Series X. Those are still slated to release at later dates with the older consoles seeing the game first and then the update for the others coming after that. It is something that will not sit well with many out there, but I am sure it will play out just as well unlike other titles that did not go that way at all.

It would have been nice to get some solid release dates for Chernobylite on the consoles, sure, but this one is what it is. It does also come with a nice look at some of the stuff that has been altered over the time of the development. Some of the things that have shifted seem to be the gameplay that takes place in the rifts and alternate world of it all. Given that they have made Chernobylite less linear and a bit more dynamic, it was something that needed to ebb and flows just as the core game. It also sounds like it was more of the art style and changes of it all too. Something you can have a bit of a look at below and see a few more places in the virtual side of it all. Less of the real-world scans of the area that the game is also taking place in.

Here it goes: Chernobylite finally have its Premiere Date! We will speak a bit about the changes of the development, but the most important info will be the one about the release: on PC, current-gen and next-gen consoles!

Are you upset that Chernobylite will be taking more time to hit the consoles out there or do you even care? How do you feel about things moving into a more dynamic style of gameplay and do you think it will be the better choice to go with for this title? Do you like the look of the other worlds out there or were you more excited to see the real-world locations instead of this? Give us that feedback down in the comments and then feel free to discuss it all if you so wish to. We will keep all of the news for Chernobylite and all of those other video games flowing to you out there. Just be sure to keep checking back for all of that and much more as time moves forward.