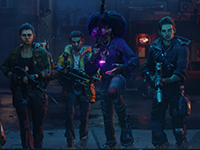 A new open-world co-op title, Redfall, was announced at E3 and Redfall will have us out there hunting down all manner of vampire

During E3 this year, we have had a plethora of new titles announced, with many being new IPs, and here we go with one more by the way of Redfall. This would be the next huge title that Arkane Austin have been working on over the past bit of time and they are aiming to bring us a new FPS title to explore and slay in. A new FPS title that is also an open-world with co-op as we hunt down some genetically modified vampires out there. I hope you read all of that correctly, as this is the basic for Redfall that we have here as we get ready to wait for Summer of 2022 for it to actually hit the Xbox Series X and PC. Only so many more night cycles to go before we can check it all out and place ourselves in the role of one of these psychic vampire hunters in the mix. That will all make sense here shortly.

Now that the basics are out of the way, Redfall looks like it is going to take the same approach we have seen in other co-op shooters and blend the single and multiplayer aspects along the way so we can play it solo or go in with a full squad of four. Those four being highlighted rather well in the following cinematic trailer we have for it too. Each will have their own brand of firepower and abilities for us to use and understand as the story unfold. A story that will revolve around vampires that were created through experimentation and have descended on Redfall, Massachusetts. As hunters, we are going to have to go in with our gear and companions to clear it all out and document it for the world. As long as the bloodsuckers and their weird new cultists do not end us all before we can do that. Now we just need to wait for some actual gameplay to see how big of a task that is going to be as this new cinematic makes it look like it is going to be rather easy.

Redfall is an open-world co-op FPS from Arkane Austin, the award-winning team behind Prey and Dishonored. Continuing Arkane’s legacy of carefully crafted worlds and love of creative game mechanics, Redfall brings the studio’s signature gameplay to the cooperative action and FPS genres.

The quaint island town of Redfall, Massachusetts, is under siege by a legion of vampires who have blocked out the sun and cut the island off from the outside world. Trapped with a handful of survivors against a horde of creatures threatening to bleed the town dry, players will choose from a diverse roster of heroes and group up with others to create the perfect team of vampire slayers.

Redfall blends single and multiplayer options seamlessly, allowing the player to venture into the darkness alone or to squad up with up to three friends for four-player co-op. Teammates can try different hero loadouts and combine their strengths to overcome the vampire legion and their brood of maniacal followers.

At its core, Redfall is a true Arkane experience that will immerse players in a deep campaign, uncovering the mystery behind the appearance of the vampires. Killing hordes of vampires requires creative thinking, and players will collect and customize a massive arsenal of specialized weaponry as well as select and refine unique character upgrades and abilities to suit individual playstyles for guns blazing or stealth combat.

Arkane’s new open-world is handcrafted by the master-level designers behind Prey’s Talos 1 space station and Dishonored’s Dunwall. From the once-bustling downtown and the haunted forest to the decimated seaside boardwalk and beyond, players will fight through cultist outposts and supernatural psychic spaces.

Redfall’s vampires aren’t your typical bloodsuckers. They were created after a scientific experiment went horribly wrong and are continuing to evolve. After their transformation, some vampires develop powerful abilities and grow into bigger and badder vampires. But they’re not the only thing standing in your way – players will also face off against the human cultists who worship the island’s hungry new leadership with the hopes of joining their ranks.

Unconventional Heroes Vs. The Night

Players will choose from a team of heroes with unique abilities:

How do you feel about this new IP that Arkane has for us and do you think it will live up to this trailer's hype? Do you think that we might get to see more hunters in the mix or will it be these four that we get here and their very different brand of fighting? How do you think Redfall will build upon their other successes out there or will they deviate from those patterns for this new IP altogether? Let us and the world out there know what you are thinking down in the comments and then feel free to discuss it all if you so wish to do so. We will share all that we can for Redfall as we get it. Just be sure to keep checking back for all of that and much more as the news keeps flooding out there.