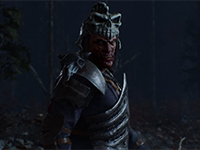 The first gameplay for Evil Dead: The Game is here and it is bringing all of the greatness of the Evil Dead IP to us

The night has finally fallen and we are here with the first full gameplay for Evil Dead: The Game. Not only the gameplay for the game but a solid breakdown of it all from the man himself, Bruce Campbell. The same man that helped make the IP as famous as it is as well as the man bringing us more quips and fun from Ash when the game is finally out there. Something that Saber Interactive has done a great job of teasing up until now, as we finally get to see how this four-player co-op game works and will be adding into the Evil Dead universe just a bit more. That or let us all recreate some of the scenes from the game and help more of the characters actually make it all the way to dawn. It is kind of a bummer when they all are normally dead by then. Fans of it all will see the thing I hid in there…

The basics are about what you would expect in a 4v1 style of multiplayer game but with the Evil Dead flair for the dramatic and camp added on top of it all. We will venture out into various settings from the IP to hunt down pages from the Necronomicon, Knowby tape entries, and various other elements that we will need to bring down the Kandarian demon and its minions out there. From the looks of it all, once we have all of these items we will need to perform s ritual to send them back to Hell while surviving more of the minions attacking us. All with the gruesome and bloody over-the-top style that Ash and the crew can come up with to dispatch all of these creatures. From mundane items found around the game's environment to the classic Boomstick and Chainsaw that have been iconic for so very long now.

That is all well and good for the heroes of Evil Dead: The Game, but for those that want to be a dick or one of the men in Anne's life, we can become the demon with all of the powers one would expect us to have. They are not given in detail, but it does look like it will have the ability to possess things in the world to attack with as well as move about in the traditional Evil Dead camera manner. It does look like some of these demons are being pulled from Ash Vs Evil Dead, so they could have all kinds of other powers than we have seen before. Hopefully, or not hopefully, we will not need to go through a dendrophiliac's wet dream scene again here. I am sure it was considered but as of now, it does look like the characters could be spared that hardship out there. Then again, maybe not…

The first look at the gameplay of Evil Dead: The Game is here! Narrated by the one and only Bruce Campbell himself. Stay tuned for more gameplay episodes coming soon.

Featuring Bruce Campbell as the original boomstick-brandishing, chainsaw-wielding hero Ash Williams, this video is your first major look at the co-op and PvP multiplayer action game, coming later this year to PC, PlayStation 5, PlayStation 4, Xbox Series X|S, Xbox One, and Nintendo Switch. You’ll also get a glimpse of new surprises like Cheryl Williams and Henry the Red as playable characters, plus Ash’s Delta (and yes, you can drive it).

Inspired by the iconic horror, humor, and action of the Evil DeadEM> universe, Evil Dead: The Game brings the biggest characters together from the franchise in an over-the-top, gore-filled experience against the forces of darkness. Work as a team of four survivors, including Ash, Kelly Maxwell, Pablo Simon Bolivar, Scotty, Lord Arthur, and more, to fight Deadites, banish the vile Kandarian Demon. Or become the mighty Demon yourself, using your powers of possession to stop the good guys dead and swallow their souls!

Battle across memorable sights from the franchise, including the infamous Knowby cabin, brought to life with tons of terrifying visuals and all-new dialogue from Bruce Campbell. Discover more than 25 weapons, including Ash’s Gauntlet, Boomstick, and chainsaw, and level up a variety of skill trees to grow even stronger and survive the night.

Is this the style of Evil Dead game you have been hoping for, now that we have the footage, or will you need to experience more before you can make that call? Do you think that we will get more powers from the demons that we saw in the show or will we see more of what we had in the films, as the last tease gives us? Could we see any of the musical get mixed into it all here too and maybe have a chance to "Do The Necronomicon" as part of the banishing spell? Let us all know down in the comments and then feel free to discuss it all until dawn. I know I will be searching for all that I can for Evil Dead: The Game and then sharing it with you here. Just be sure to stick close to the website here to see and hear all of that as it comes to light.