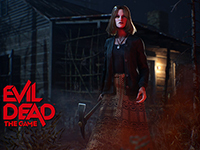 Evil Dead: The Game looks to have another character to show off with Cheryl Williams from the original Evil Dead making a showing

Another of those classic characters will be heading back in for Evil Dead: The Game when it comes to us on the various platforms this year. This time it is another character that many might have figured would be in here and would be odd for Saber Interactive to not include. This would be Ash's sister Cheryl from the original Evil Dead coming out swinging with a pickaxe here. We assume it is swinging a pickaxe based on the teaser image we have here right now, but it could be something that changes during the actual gameplay. Also, her state of being in the game could be changing in the game too, if they follow the films at all. Cheryl does go Deadite fairly quickly and this looks to be the normal human form. Maybe this means that we could see an alternate of each character in the game just for these kinds of shifting instances?

The announcement of all of this does make it seem more like Cheryl is out for revenge in Evil Dead: The Game over just being another character in the mix, so maybe this means things have been corrected and she might get just that. Given that this is a multiplayer title where we will need to face off with other players, I have a feeling my thoughts above could ring true just to keep the roster filled and the characters feeling a bit more diverse amongst it all. We will get a better understanding of all of this during the week, though, with Evil Dead: The Game also promising our first real gameplay look as we head toward the big E3 reveals and shows. I know I am insanely interested in seeing how this will all work and am already counting the hours until this reveal shows itself to the world at large. Ash’s little sister is back for revenge

Here’s your first look at Cheryl Williams in Evil Dead: The Game

Get ready for the unveiling of Evil Dead in action. The official first Gameplay Video will be world premiering this week Thursday June 10 exclusively at the @summergamefest. pic.twitter.com/4SdMRb1WFu

Was Cheryl a character that should be assumed to be making their way back from the base Evil Dead line or was this a surprise for you? Do you suspect that we will have all of the main roles with a few new ones sprinkled in over time or will we have newer characters flood the roster soon too? Do you think we will see Deadite versions of all of the characters too so we can use them on the opposing side at some point in the game? Give us all of that feedback down in the comments and then feel free to discuss it all if you so wish to do so. Obviously, we will have more for Evil Dead: The Game as soon as it is out there. Be sure to keep checking back in for all of that and everything else that we may have to offer too.