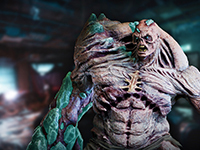 The horrors are creeping out much more in After The Fall with a closer look at another of the creatures shambling out there. This is a VR FPS title hitting all of the PC platforms and the PSVR for the PS4 and PS5 if Vertigo Games has anything to say about it. Something that they do here with the latest creature showcase for After The Fall where we get to see two new ones we will have to deal with. All on our own or with some friends in the same setting. My guess is through an online play of it all or with some AI to make sure we do not get overrun that quickly out there. That is the hope here, as it does look like it could be a bit of a hectic thing out there if we do go out on our own.

These new enemies in After The Fall are called the Snowbreed and it definitely looks like they live up to the name we have here. They look like they are moving a bit slower than we normally see in games like this. Possibly because they look to be cold-based but also because the AI is supposed to have them work like a wolf pack more than rushing zombies out there. That could be something hard to fend off, especially when you see one of the brute-style creatures in the pack. Something that moves even slower but will do massive damage, be able to take more damage, and also lift us off our feet in the game. How that will work better in VR is hard to see here but something that the team thinks will work better in this form. We will see this Summer when the game is slated to hit us, though.

Join the devs of After The Fall for a closer look at the Snowbreed you’ll fight and the weapons you’ll wield in the frozen apocalypse! After the Fall is a co-op action FPS made exclusively for VR, coming in summer 2021.

Do you like these new creatures in After The Fall that we will have to face off against or could they swarm too well and take us all down? Do you think the AI will have them work more like a wolf pack or does it still look like they are just rushing us in a slower manner? How do you think being lifted up by the Brute will feel here and will it work better in VR than a traditional FPS style? Give us all of that feedback down in the comments and then feel free to discuss it all if you so wish to. We will keep the news for After The Fall flowing out there, so be sure to keep checking back in on the site for all of that and much more. We hope you will be all engaged enough to keep everything going.