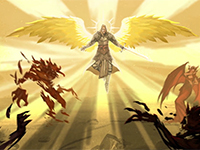 Take in more for Pathfinder: Wrath Of The Righteous as we see the paths we might be going down in this Pathfinder experience

The development for Pathfinder: Wrath Of The Righteous is flowing forward well and smoothly from what we have heard from Owlcat Games and we still have September 2nd to look at for all to get in on the game on PC. Thankfully, we are here to not talk about any kind of delay after its last great showing of the game for us and are here to start sharing a bit more of the story for those that may not be up on it all. Nothing in the way of spoilers out there, obviously, but also a bit more to expand on what the tabletop Pathfinder gamers might already know a bit more of. The story will be a bit of a shift to keep things interesting, all while staying close enough for those that truly enjoy the story from before. For those looking to know more and keep clear of things, this is the one for you.

All of which here is done in a fun animatics style of video that offers up what is causing the issues in the world here. In Pathfinder, there is a location called the World Wound and we have massive amounts of demons and devils flowing out of it all. Those who venture forward to help stop all of this lose their minds or succumb to the demonic powers. This is why our character, and our companions, are venturing out to be the destined ones to try to put a stop to it all. Given that it is open still in the worlds of Pathfinder, it does not go exactly as planned. There is a whole arch and surprising way for it all to end. Have a look and see the basics of what to expect and see how the Angelic path will leave us at the end of it all. Maybe we will see something down the Demonic or Lich paths at some point too.

Pathfinder: Wrath Of The Righteous — Ascension

Owlcat Games is proud to announce that Pathfinder: Wrath Of The Righteous will also be available for purchase on the Epic Game Store when it launches for PC later this year on September 2nd. This hotly-anticipated title is a faithful CRPG adaptation of the popular tabletop roleplaying system, Pathfinder First Edition.

The new store page for Pathfinder: Wrath Of The Righteous on EGS will include the new Wishlist feature so gamers can stay up-to-date regardless of which client they buy games on. Owlcat wants players to be able to access the game no matter their preference of storefront and invites players to wishlist the game on the EGS, Steam, or GOG.

This announcement comes on the heels of the Community Quest series coming to a close. The community event started in February and gave the dedicated backers of Wrath Of The Righteous the opportunity to vote on critical events across the story, leading to this climactic trailer. This finale shows off one of the main antagonists of the game; a demonic priestess named Areelu Voresh that players will come to dread when the game releases this fall.

Owlcat Games is excited to reveal that streamer Cohh Carnage has joined the crusade and players will be able to use his voice for their commander! Choosing the male voice option "optimist" during character creation will enable a solid voicepack, full of Cohh's charm and joy of life.

Pathfinder: Wrath Of The Righteous will launch for PC via EGS, Steam, and GOG on September 2.

Did you need this refresher for the story in the Pathfinder universe or have you played it many times before? How different do you think it will be from the basic version of it all or will it always be a dynamic story given how these tabletop-style games usually go? Have you figured out the Mythic path you are going to go down or will you need to wait until September to make the choice of it all? Let us all know down in the comments and then feel free to discuss it all if you so wish to. We will keep the information for Pathfinder: Wrath Of The Righteous flowing out there as best as we can. Keep checking back in for all of that and much more in the coming weeks and months.