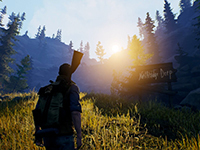 One more title that seems to have gone under radars here is Open Country and all to the point that here we go with the announcement of when it is hitting the PS4, Xbox One, and PC. This would be the next title out of Funlabs and 505 Games that will take us into the wilds of the world to play out those hunter fantasies in a video game space. Maybe you have had those or maybe you have not. It just looks like Open Country will be offering up all of those gameplay mechanics we usually use for sci-fi or supernatural elements out there; just in the realm of hunting animals and surviving the elements out there in general. All of which will be here on June 3rd for those that are looking to virtually get out there and not physically get out there in this way.

I know I have missed the marks for Open Country up until now and it looks just as I said; like another survival game where you are not going to be fully left out from the start. We will need to stalk the lands for indigenous animals in the landscapes that will react as they should in the real world. All while the environments change and shift and place us all into different situations. It does look like we will have the tools of the trade to help with all of this, hence why I say not a huge setback from the start, and just need to worry about the basics of it all. From normal hunting to fishing and everything between. It does make me question who Open Country is for since it would seem the audience would most likely be heading out to do this in the real world, but I am sure there is a group that will enjoy it anyway. It would be a little less costly at the end while not the same experience.

The Open Country launch trailer showcases an explorable environment where survival, sport hunting, and more are all at a players’ fingertips.

Developed by Funlabs, Open Country is trekking to the Epic Games Store and Steam for PC on May 18. Players can add Open Country to their Wishlist now.

Open Country places players in the hiking boots of an all-too-familiar corporate worker drone who yearns for a change from their restrictive city life. Eager to breakaway from the hustle and bustle of the big city, players and their trusty canine companion are faced with newfound freedom to explore and survive among the untamed wilds and relish in the open spaces of their new life.

Featuring a third-person open world that ranges from lush foliage to harsh landscapes, Open Country’s environment stands ready for players to explore while learning important survival and hunting skills along the way. Want to become a Master Outdoorsman? Players can visit Gary at the Snowridge Lodge and by the Park Ranger to complete more than 30 missions designed to put their newly learned skills to the test.

Will you be aiming to be the next Mast Outdoorsman here with Open Country or does it seem like a title for a small subgroup that will be doing this in real life instead? Do you think there will be something that uses the scents and sounds better in the game or will it only be enough to give us a close feeling for it all? Do you think this will all take place in an American wilderness or will we be able to travel a bit more than that? Let us all know down in the comments and then feel free to discuss it all if you so wish. We will keep share things for Open Country and all other games as best as we can. Just be sure to keep checking back in for all of that and much more. We aim to cover it all as best as we can.