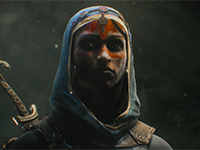 The post-launch content for Hood: Outlaws & Legends is revealed with new maps and a new Outlaw joining the crew of Robin Hood and others

May 10th is not too far off and we will see the base game for Hood: Outlaws & Legends out there on all the systems for us to enjoy. That, of course, means that it is time to start the announcements for the post-launch content and why you should be throwing down for the Season Pass for the game here. Something that Sumo Newcastle has already planned out over the coming year after the full release of Hood. It will keep some of us locked in to keep the heists going, a bit longer, and hooked on the game. Especially since it looks like we will have some things that are not just cosmetic upgrades to the game and things that could change the experience along the way of it all.

The dates on when all of this will hit Hood is still not fully set, but it looks like there will be both free and premium content that will be coming. The first of it all being a new location called the Mountain that offers up a few new ways to go at the heist here. With some nice sniper lanes to use and navigate, but also some open bridges to need to sneak past everyone on. Something that I have a feeling will help set up the new character, that is just teased, to give the team a slight advantage in that. Maybe? We will have to wait to see if that is the case with the new gameplay modes and community events that will happen too. Have a look at the little tease we have for it all and see how the seasons will change over time in the game here.

Hood: Outlaws & Legends, the multiplayer PvPvE heist game from Sumo Newcastle and Focus Home Interactive today unveils its first post-launch plans in a new trailer. Gather your team of Outlaws and attempt to steal treasure from an oppressive government in a dark and violent medieval world. All players can look forward to a wealth of free gameplay content across the first year of post-launch support, while those who purchase the game’s Year 1 Edition will gain access to three premium Battle Passes covering three seasons, to unlock exclusive cosmetics. Watch today’s Post-Launch Content Trailer for a first look at what you can expect to see in the months ahead!

Hood’s first year of post-launch support will be split into four themed seasons, each containing major free gameplay additions, community events, new cosmetics, and more. A new map, Mountain, will arrive shortly after launch as part of the initial season: Litha. Made up of two distinct areas connected by bridges, the mix of long sightlines and tight, coverless overpasses make Mountain a fresh, deadly challenge.

As teased in today’s trailer, more additions are also coming to Hood soon! The initial season, Litha, will also bring a brand new game mode to spice things up with a greater focus on bloody action. Looking further ahead, a new free Outlaw is also due to arrive in Sherwood — stay tuned for more info about Eidaa and her heist-changing abilities in the near future.

Post-launch support doesn’t end with free content updates! The Year 1 Edition is available for pre-order now, including access to Hood and three premium Battle Passes packed with exclusive cosmetics due to be released post-launch after the initial free Season. By pre-ordering either the Year 1 Edition or base game today, you’ll get early access to Hood: Outlaws & Legends starting May 7, as well as the Forest Lords cosmetic pack for free. The Forest Lords pack includes a skin for each character and weapon in the game.

Pre-order now on PlayStation 5, Xbox Series X|S, PlayStation 4, Xbox One, and PC to get exclusive bonuses and early access to Hood: Outlaws & Legends from May 7 — three days before the official release on May 10.

Was it expected to see that Hood was going to have post-launch content already planned or did you think it something that should have been held off until we see how well the game does in the first place? Who do you think this new character is going to be here and will they add a whole new style of gameplay in the mix of it all? Does it sound like we might see some environmental effects in the mix based on the names of the updates or will that just be the fancy way of naming things? Let us all know what you are thinking down in the comments and then feel free to discuss it all as you wish. If there is more to share for Hood: Outlaws & Legends, we will throw it on the site for you. Keep checking back for all of that and everything else we might have to offer.