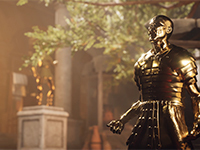 It feels like that time loop in The Forgotten City is going on in the real world at this point, with the game now getting a Summer release out there for us all. Those keeping a close eye on what Modern Storyteller was setting up would know that the original plan was to drop the game in the Winter of 2020. That has well come and gone with no one out there having the chance and time to play The Forgotten City now. Well, outside of the developers and those working close to the game. Now it looks like we could see the game out there in a few months so we can try to solve the issue of the "Golden Rule" in the game's world. Although, at this point, it would have been nice to have a month to look for at the very least.

There is not much of a reason given for the longer wait we have for The Forgotten City, but I have a feeling it might be due to the next update we have for the game. Originally it was listed as only hitting the PC and Xbox One when it drops. As of now, we will be able to see the game hit the PS4, PS5, Xbox Series X, and Switch when it launches now. There is almost no one out there who will not have the opportunity to pick up The Forgotten City when it does finally launch. A nice little extra and good reason to have a bit of a delay to it all. If you can call a six-month delay a little one. Nonetheless, we will see it all out there this Summer. Unless they choose to delay it all one more time and reset us on a different timeline out there.

The Forgotten City was also announced for Nintendo Switch, PS4, PS5, and Xbox Series X today, and will also be available in the previously announced PC and Xbox One versions.

The game is an ambitious full-scale reimagining of the award-winning mod of the same name which has been downloaded no less than 3 million times.

Trapped in a secret underground city in the time of the Roman Empire, twenty-three lost souls cling to life. In this precarious utopia, if one person breaks the mysterious Golden Rule, everyone dies. As a time-traveler drawn two thousand years into the past, you’ll relive their final moments in an endless loop, exploring and interrogating, and changing the course of the day with each secret you uncover.

Have you been waiting for The Forgotten City to launch out there or did it slip from your memory up to now? Do you think it was the extra platforms getting added in that caused the delay here or could it be something else that also added to all of this? When in the Summer do you think we will see it finally launch out there and will it be sooner and not later? Let us all know down in the comments and then feel free to discuss it all. If there is more to share for The Forgotten City, know that we will share it all here. Just be sure to keep checking back for all of that and everything else we have to offer. Hopefully, it will all be what you are getting excited for over all of this time.