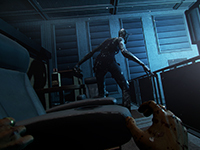 New gameplay is here for Wraith: The Oblivion — Afterlife as we find out when we will become the Wraith of our nightmares

I have been so very hyped to get to experience Wraith: The Oblivion — Afterlife on my VR headset and now it looks like we know when that will be happening, more or less. It has always been sometime in the Spring of this year and now we have solid release dates for the game. This is all dependent on which headset you are looking to play this Wraith title on from Fast Travel Games. Now we will see it hit the Oculus on April 22nd, the SteamVR on May 25th, and then PSVR sometime later in 2021. That is the only one that seems to be missing the Spring date that was first placed down, but that is okay and I have a feeling that it will be in June if the current timeline syncs up.

In addition to seeing these nice release dates here, it looks like we have some new gameplay for Wraith: The Oblivion — Afterlife to dig into as we watch some of the worst players show it off. I say this as it is from some content creators that have been given a chance to experience some of the game, but overreact as they normally would for their streams in videos. It can be a bit of entertainment for those not looking to see someone experience the game as most of will, but the jerkiness of the video is a little disorienting and annoying to take in. Especially when it is showing off a few of the gameplay elements and a full "level" of the game where we look like we are getting used to being a Wraith for the first time. Take that as your first warning before diving into it all.

Watch 10 minutes of gameplay as four creators BECOME WRAITHS and learn how to use their new supernatural abilities in Wraith: The Oblivion — Afterlife, a VR horror game set in the World Of Darkness universe.

Will you become a Wraith here in April or will you be holding off until it hits the other platforms along the way? How do you feel about the new gameplay that we have here and does it help entice you into the world of the setting and the creatures we will be playing as? Do you like this kind of gameplay or should they have tried to get better players to help show it off in a smoother aspect? Let us have all of that feedback in the comments and then feel free to discuss it all down below. If there is more to share for Wraith: The Oblivion — Afterlife, we will definitely share it all with you on the site to enjoy. Please keep coming back for all of that and the various Arcanoi we might get to see here.