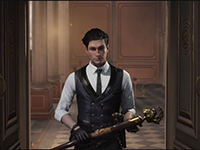 It looks like we did not have to wait long until we had our first taste of actual gameplay for Sherlock Holmes Chapter One since last we heard anything for the game. We are still ways out from it launching, but it is nice to see how some of the game will be handled here by Frogwares. Something that looks like it will place this Sherlock Holmes in some fun action-oriented scenes while still going into a full investigation mode for things out there. He is still in his early years in this bit, so we should expect there to be a bit of roughness around the corners. Something we can see a little with this teaser while we wait for more for the game to get out there.

This is just a teaser for the gameplay but it does look like all of the various aspects of Sherlock Holmes from over the years are getting mixed in. All from the basics of investigation to the brawling, we have seen in some of the other forms of media out there. It also sounds like we will be getting a different version of the Jon Watson character than we have seen along with Sherlock Holmes too. There is not much seen of him in the video we have here to take in, but it does sound like there will be some mystery mixed in besides being our best friend in the game. I read this as Jon might be an imposter this time around and we find the one we know from all of the other sources in the years. We will only have to wait a bit longer to find all of that out.

As Sherlock, your legacy is written by the decisions you make in this open-world detective adventure. Deception, violence, and deduction are just a few resources in your arsenal—your mysterious companion and sounding board, Jon, is another.

Whether you choose brute force to solve problems or stay one step ahead of your enemies by using your wits to spot vulnerabilities, you decide what each situation demands as you hone your investigative skills. It’s time to confront your past so you can become the legend you’re destined to be.

Do you think that this will be the version of Sherlock Holmes many will want to experience or will it all end here and go back to the classic? How do you think Jon will be different and will it be that big of a mystery in the game? Do you think the combat will flow in a QTE form or will it be a free-flow kind of ordeal in the mix of it all? Let us all know down in the comments and then feel free to discuss it all as you wish. If we have more for Sherlock Holmes Chapter One to share, we will add it here for you. Be sure to keep checking in for all of that and much more.