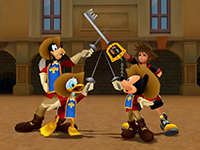 Good news for those that have been pining to play Kingdom Hearts on your PC without having to go through some roundabout methods. It looks like Square Enix is finally giving those the option to do so on March 30th. Yes, there will be a full release of not only the most recent Kingdom Hearts title, but the entire IP will be out there with all of the DLC and spin-offs that have been out there since the whole thing popped off. Now it will be a whole new generation that will get lost in the convoluted story that has been out there. All with the high-end visuals and fun that have evolved over the years.

This is not going to be one big bundle of all the games but various packages for Kingdom Hearts that will be HD 1.5 + 2.5 Remix, HD 2.8: Final Chapter Prologue, III + Re Mind, and Melody Of Memory all with the same goodies that we have seen before. Also, all of which will be about $50 USD so get ready to spend a whole lot more of the IP than you should have expected over the decades. Maybe this will give them more reason to give us Kingdom Hearts III DLC to expand or probably more titles in the line. Not that we have been able to comprehend the overall story so far.

Did you ever expect to see Kingdom Hearts land on the PC or was it only a matter of time? Do you think it is odd to not have a whole bundle of titles and split it up like this? Could this lead to a fourth entry into the franchise or more DLC or just a new profit for the company instead? Let us have all of those thoughts down in the comments and then feel free to discuss it all as you wish. If there is more for Kingdom Hearts at all, we will share it here for you. Maybe we will see it branch out even more and get more gamers in on it all.