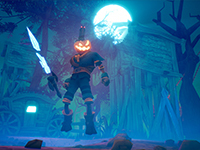 Here we go with Pumpkin Jack coming back at us fairly strong and for a whole new platform now. I mentioned it before that it was odd that the game it the PC, Xbox One, and Switch all at the same time before, but now Headup Games is bringing it to us on the PS4. Good news for those out there that have thrown in on that platform and thought Pumpkin Jack could scratch and ich for you too. Get ready for it all to get scratched on February 24th here. If you are looking for another fun platforming title that is.

It does not look like there is anything else coming to Pumpkin Jack with this release but just the new option to play it all. This is not a huge surprise with how fast it all turned around but also just odd to have the delay. It does feel like we could potentially see a full next-gen update to come for Pumpkin Jack after seeing that the team is still working on it all for more gamers. I am talking outside of just playing it all on the backward side of things and more on the base system thing. I guess we will just have to wait a little bit longer now.

Pumpkin Jack is coming to PS4 on February 24!

Pumpkin Jack is a Spooky Scary 3D platformer in which you embody Jack, the Mythical Pumpkin Lord! Dive into an Epic Adventure through otherworldly landscapes and help the Evil annihilate the Good!

Travel through epic and dramatic settings, with each level having its own eerie atmosphere. Using a vibrant palette and high-quality lighting effects, Pumpkin Jack invents its own unique cartoon universe inspired by the classic PS2 graphic style.

You will have to master the arts of dodging, timing, and movement to vanquish Jack's foes. During the dynamic real-time battles, choose which weapon you want to use and strike at the critical moment! Solve puzzles that focus on physics, gravity, and reflection. Inhabit a pumpkin head and burn books, hammer some moles, create a path for magic spheres… But also more!

Did you think that we would never see Pumpkin Jack hit the PlayStation systems or is it the best surprise to have? Do you think we will see anything expand the game further or will it just be the platforms it is available on? Could we see the game hit the next-gen systems out there or will this be as far as it all goes for now? Let us all know down in the comments what you are thinking and then feel free to discuss it all. If there is more for us to share for Pumpkin Jack, we will have it all here. Be sure to keep checking back for all of that and more.