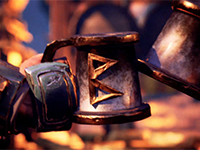 The big game just wrapped up and there are those out there that enjoyed it, while others out there need something a little more comical as we will see with Blood Bowl 3 this coming August. Fans of the IP over time will know how that could all work out there as Cyanide keeps updating and adding to the fun out there. To go along with all of this, we have a fun ad for this Blood Bowl that tries to give us the same humor from the real world but in the fantasy universe of the game here. Take that as we most likely do not have much in the way of gameplay but a look at two teams at the very least.

Just as with the big game ads, we have a nice beer commercial for Blood Bowl here that will have the dwarves out there all riled up. It really does seem like it is all for fun, but it would be interesting to see if these would actually play during the game in general out there. That could be a little too distracting for some, but it could be a fun little thing to have added into the mix of it all. I am sure that if it is something it will be in the beta for Blood Bowl 3 to test the waters for it all. If anything, it gives us some humor to take in and enjoy while we wait for the full title to get released out there.

The most-watched sporting event on American television has just come to an end. Despite a large number of ads, keen-eyed observers will have noted the absence of a top brand, Bugman’s Beer! Head brewer, Joseph Bugman, was eagerly awaiting this occasion to promote his best beer, Bugman’s XXXXXX, the most refreshing and refined beer in the Old World. But alas, the beardling brewery courier didn’t get the tape to the network on time – he’s now a trollslayer.

Bugman’s XXXXXX is a brewed beer distributed all across the Old World. From the tip of the froth to the bottom of the mug, each sip is pure delight. At the mere sight of a Bugman’s XXXXXX, even a clumsy dwarf can take out an entire opposing team and sprint 25 yards just to get a taste. If you don't believe it? That’s because you've never drunk a Bugman’s XXXXXX! Discover its unique flavour before your next Blood Bowl match!

Funnier, bloodier, and more spectacular than ever, Blood Bowl 3 will be a hit with fans of the universe and strategy games alike. At launch, the game will include 12 teams' each with their own pitch and cheerleaders, Campaign and Multiplayer modes, and more customization options than a Blood Bowl game has ever received before.

Planned for release in August 2021, Blood Bowl 3 will be available on PlayStation 4, PlayStation 5, Xbox One, Xbox Series X/S, Steam, and Nintendo Switch.

Did you enjoy this fun little video for Blood Bowl here or is it just a waste of time and money for the game right now? Do you think we will get more of these during the actual gameplay or will it just be for the internet marketing for now? Could we see more of this before the August release window here or will it just be because of the big game tie-in here? Let us all know down in the comments what you are thinking and then feel free to discuss it all as you wish. If there is more for Blood Bowl 3, we will share it all here. Keep checking in for all of this and much more as time marches forward.