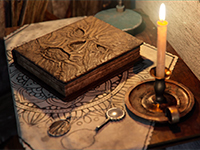 Evil Dead: The Game has been announced to bring the Evil Dead franchise back to us for one more groovy trip

The deadites are back and ready to take us all down when Evil Dead: The Game hits the PS4, PS5, Xbox One, Xbox Series X, Switch, and PC next year. This seems to be one of the other things that the almighty Bruce said he was working on. All of which comes from Saber Interactive and Boss Team Games. Not only that but using all of the lore from the core films and the Ash Vs. Evil Dead show. Also bringing back the voice and the chin for one last ride into the fight with the dead and close the Necronomicon once more.

We have had Evil Dead video games in the past and this one seems to deviate from the style we have seen in the past. This one will be a multiplayer co-op game that will bring characters, or look-a-likes, in to take on the bring down the evil out there. That or actually be the Kandarian Demon out there that can take control of the lesser possessed and parts of the environment. Kind of like a few of the other many vs one titles out there, but with the Evil Dead flare. This is a franchise that has always been near and dear to my heart, so it is going to be a must-play for me on day one for sure. Have a look at what we have for the reveal and hopefully see more soon.

Based on the Evil Dead franchise and characters created by Sam Raimi, Robert Tapert, and Bruce Campbell, the game casts players against the forces of evil that have been unleashed from the Necronomicon Ex-Mortis, with sights and sounds inspired by the films The Evil Dead, Evil Dead II: Dead by Dawn, and Army of Darkness, as well as the STARZ original Ash vs Evil Dead television series.

Work together as a team of four survivors, exploring, looting, crafting, managing your fear, and finding key artifacts to seal the breach between worlds. Or take control of the powerful Kandarian Demon to hunt Ash and his friends while possessing Deadites, the environment, and even the survivors themselves as you seek to swallow their souls!

Plenty of surprises await in this gore-filled battle against evil that captures the characters, horror, humor, and action from the franchise. Battle across memorable locations including the infamous cabin in the woods, brought to life with tons of terrifying visuals and all-new dialogue from Bruce Campbell. Discover more than 25 weapons, including Ash’s Gauntlet, Boomstick, and chainsaw, and advance in a variety of skill trees to grow stronger and survive in this fun co-op and PvP experience.

Did you expect to see Evil Dead come back to us in this way or did you think we would see something like the last big video game out there? Do you think we will see more direct characters from the shows and films or will it be more of a generic look to keep it broad but respectful of the source? How graphic will the scenes be where you can control the world as the demon and will it be to the level we have seen so many times before? Let us all know down in the comments what you are thinking and then feel free to discuss it all. If we have more for Evil Dead: The Game, you best bet we will have it here. Check back here for all of that.