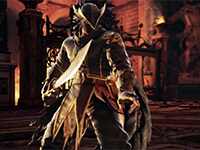 If you have been waiting for more fighters to come to Soulcalibur VI, then get ready for December 2nd to come our way, as we have a new unknown soul joining the fight. Well, unknown until you watch the trailer where Bandai Namco tells us that it is Hwang coming back after fighting in disguise here. Not the biggest of shocks, but it does round out the latest fighter pack for the game with the character joining back in for the Soulcalibur universe. Now we just get to sit and wait to see if there is going to be another fighter pack or if this will be the last DLC until the next full title is released to the world.

I will say that I am a little surprised that it took this long to get the character into Soulcalibur VI but at least it is happening now. Even if he does seem to function like many of the others to me. At least we will be seeing all of those other updates, like the new level, the ability to mix in Tekken fighters with the character creator, and much more when this all drops here in a few days. The Soulcalibur fanbase is a big one and I am sure this will stir things up just a bit more for them. Or this will be the final thing we see for a few years until the next full title is placed out there on the next-gen systems.

Hwang will be coming to Soulcalibur VI on December 2nd! ⚔

Hwang is part of Season Pass 2 for Soulcalibur VI and can also be purchased as a standalone DLC character.

Have you been waiting for Hwang to come back to the Soulcalibur games since this one launched or were you hoping for a different character yet again? Do you think we will see a third fight pack of DLC or will they hold off on that to just give a whole new title? Will you be using the other functionality that is coming with all of this or will you be button-mashing your way through the game one more time? Let us all know down in the comments and then feel free to discuss it all as you wish. If there is more for Soulcalibur VI, we will update you on the site with all of that. Please keep checking back for all of that and much more.