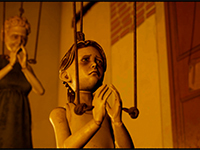 It is always nice when we get a two-for as we have for Martha Is Dead today. The two-for being that we have a new trailer for the game from LKA well before the 2021 launch and then the announcement that more gamers will have the chance to give the game a go. Martha Is Dead was already coming to the PC, Xbox Series X, and Xbox One at launch, but now we get to add the PS5 and PS4 to the list too. A nice little extra for a game that some may have thought they would miss out on because of the limited platforms it would be hitting. It may not be all of them now, but it adds a whole new family to the mix now.

All of that aside, we also have a fun little trailer for Martha Is Dead that fills in some of the ways the world will be in the game. It kind of alludes that we may see some of the story play out in these interesting puppet scenes but also how the world of the game has evolved in the eyes of the protagonist. All with the perfect levels of creep for those looking for only that when it comes to Martha Is Dead. Thankfully, it does not seem to spoil too much more for the game that we did not already know but it does offer up some fun looks at it all. Have a look down below and see what we may have missed if they did not opt to give us all the chance to see more of the game.

Developed by LKA, the award-winning studio behind the celebrated psychological adventure The Town Of Light, Martha Is Dead opens in the depths of the Italian countryside as Allied and Axis forces turn the nation into a pincered playground.

On the shores of the lake lies the body of a young woman; Martha, drowned and desecrated. Now her twin sister must deal with the fallout from her murder whilst the horror of war draws ever closer.

Announced in August for Xbox family of devices and PC, work has been progressing in tandem for PlayStation consoles, with publisher Wired Productions now able to confirm Martha Is Dead will launch on all three platforms in 2021.

Are you glad to see that Martha Is Dead is coming to the PlayStation family or did you forget about the game given the original limits we knew? Do you think we will get to see the scenes played out in the puppet way or is that just a clever marketing tactic for us all? Do you think we may have seen more of the story than we should have here or is it nice to get the recap for the game so far before launch? Let us all know what you are thinking down in the comments and then feel free to discuss it all at length. If we have more for Martha Is Dead, it will be on the site for you. Just keep checking back for all of that and more.