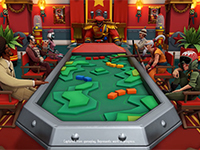 New gameplay for Evil Genius 2: World Domination is out to give us a taste of Red Ivan in the world of Evil Genius 2 with more traps to enjoy

It has been an insanely long time since we had a solid update or look at Evil Genius 2: World Domination, and it looks like the wait is going to be worth it for those looking to the game for fun. We have a new bit of gameplay from Rebellion to take in now and this one highlights one of the playable geniuses in Evil Genius 2 with Red Ivan taking the spotlight for once. It is not a huge announcement that the character is coming here, but we get to see some of his reasoning behind things and how he will play directly in the game when it does launch on the PC. Get ready for some evil fun today.

It looks like Red Ivan is coming back at the world for the mistreatment, or perceived mistreatment, of himself and thus he will be building a Doomsday Device to claim control of everything in Evil Genius 2. In the new footage here we get to see how he will have some new minions, traps, henchmen, and more to accomplish all of this in the game. Also, we get a nice listen to how Brian Blessed will be lending a voice to the character in Evil Genius 2 to help bring the character to life a little more. Something that should be fun when we take control of Ivan with a rocket launcher when the spies and heroes come into the hidden base. It is explosive, to say the least, and you can see it all below.

Feast your eyes on this world-first gameplay footage of playable genius Red Ivan, as voiced by Brian Blessed. Not only can you see Red Ivan’s literally iron fist and destructive rocket launcher in action, but also never-before-seen traps, minions, henchmen, rooms, contraptions, and more!

Evil Genius 2 is the premiere supervillain experience, combining lair-building strategy with world-dominating tyranny. Red Ivan is one of the four playable geniuses in the game, and each genius has their own unique campaign and storyline – yes, there are four unique campaigns in Evil Genius 2! That’s a lot of evil for your buck!

Brian Blessed is known for his incredible performances across film, TV, and stage, including in Flash Gordon, Henry V, Tarzan, and Star Wars: Episode 1 - The Phantom Menace - so who better to play a mastermind with a predilection for loudly blowing things up?

Are you glad to finally see one of the other geniuses get the highlight for Evil Genius 2 or did you think it was going to be held off until the game launches? Which of the new traps and such do you think you will always add to your base or will there be better ones still to come? Will all of the geniuses get the playability as Ivan or will it only be for the ones that are more hands-on as he is? Let us have those thoughts down in the comments and then feel free to discuss it all as you wish. When there is more to share for Evil Genius 2: World Domination, we will share it all here. Be sure to keep checking for more as we carry on.