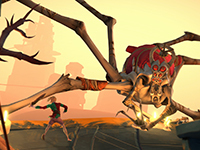 Here we go with the announcement of a new title coming out of the Deep Silver realm of games with the announcement for Gods Will Fall. This is a new and dark fantasy title from Clever Beans that aims to take us into a world where we have to bring about what the title says will happen. In fact, that is the basis of it all in Gods Will Fall, as we are setting out to bring down various and cruel gods out there as the last bastion of hope for the human race. All while leading a small group of warriors into their lands and taking on these vicious gods on the PS4, Xbox One, Switch, and PC this coming January 29th. Not far off to get the hype train going over here.

Before you start asking specifically which gods will fall in this game, it looks like it going to be a set made up by the group that only takes inspiration from real-world cultures and not something that is looking to the scope of other titles that have done this before. It does look like they are taking more inspiration from the Celtic people when you look at it all, but that is not specifically what is going on here. We could be wrong, as we only have four of the gods in Gods Will Fall announced and shown here. Each of them with their own realms and minions to help them along. All while we play the traditional top-down style of hack-n-slash game. Have a look just below and see what is on the horizon for next year here.

Gods Will Fall — Meet The Gods

Deep Silver is pleased to announce Gods Will Fall, a dark fantasy action game due to launch on January 29, 2021 on the PlayStation 4, Xbox One and the Xbox One X, Nintendo Switch, and PC.

Developed by Manchester-based Clever Beans, Gods Will Fall is a high-stakes, dark fantasy action game about the few remaining Celtic warriors of a destroyed army, on their way to overthrow the diabolical Gods. Pre-orders will go live in January of 2021.

You are the last hope for humanity. The gods’ torturous rule over humanity has lasted for millennia. Bent on cruelty and suffering, they demand to be served with blind worship through an oath of fealty pledged from every man, woman, and child. To those who don't submit to the gods’ will, a slow and merciless death awaits.

Experience the brutal trials of a venturous band of warriors in their desperate plight to sever the gods’ callous grip on humanity. Every man and woman who can muster a blade, having suffered the brutality of the gods’ reign for too long, will be called upon to form your clan of eight Celtic survivors and rise up to take on the legions of horrific beasts and minions that dwell in each of the gods’ hellish realms.

A personal tale emerges with every decision made. Succeed and see legends born. Fail and watch lives turn to dust.

How are you feeling about Gods Will Fall based on what we have to see here? Am I missing a real connection to mythology here as this is not my area of expertise or is it all inspired instead? Are you curious why we have so many games out there where we are bringing down other gods and never one that specifically aims to take down the one from Christian Mythology? Let us all know down in the comments and then feel free to discuss it all. If there is more for Gods Will Fall, we will share it all here. Just be sure to keep checking back in for all of that and much more.