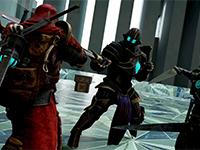 One more VR title will be coming to the PSVR system next month with Swords Of Gargantua getting a release date out there for the platform. It has been a bit since Yomuneco let us know that the game was going to be making the leap over from the PC VR world to the console, and now we know exactly when. Just in time too for those lucky enough to be able to enter it all on the PS4 or PS5, as Swords Of Gargantua hits us there on December 8th now. Adding yet another reason to strap the headset back on and possibly get lost in a new and unique sword fight out there.

For those that have no idea what Swords Of Gargantua is all about, it is a VR game that will put our sword skills to the test as we fight off other characters and players in a VR setting. It is also a fast-paced Rogue-Lite title that boasts to have some of the most realistic swordplay out there in a video game setting. All with a nice fantasy world and setting driving it forward. At the end of the day, Swords Of Gargantua is there to give us a different experience on the systems, and adding one more in is always a welcomed adventure. You can see more of what I am talking about just a bit lower down the page here.

Featuring both single-player mode and online co-op with up to 3 other players, Swords Of Gargantua features realistic swordplay in an immersive VR-enabled online environment. Players must level up their weapons and abilities to fight against a horde of enemies, and ultimately face their master, the towering titan named Gargantua. A wide variety of weapons are available, allowing you to pursue your own virtual reality action (one and two-handed swords, axes, maces, boomerangs, shields, etc.). While playing, you can use voice chat to communicate with your fellow warriors while taking on the enemies in Tesseract Abyss.

Did you remember that Swords Of Gargantua was still heading to the PSVR or was this the reminder you liked to get today? Can you see this becoming a new eSport out there if it functions as well as the hype says it can here? Do you still think that VR is a passing phase and we will see it worked out of our subculture in a shorter amount of time? Let us all know down in the comments and then feel free to discuss it all as you wish. If there is more for Swords Of Gargantua, we will certainly have it all up on the site for you. Be sure to keep checking back in for all of that and much more.