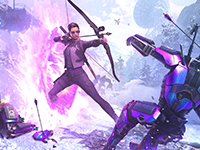 No matter your feelings on Marvel’s Avengers since it was announced and well through the launch, the game is still coming at us strong. In this case, we are getting the next big update for the game as Crystal Dynamics adds in Kate Bishop to the game and with the kick-off of a whole new storyline for us to enjoy. Something that looks to be more massive than many might have thought for Marvel’s Avengers based on how the character stories in the core game we have had. Maybe this will kick the game off yet again and make up for the massive loss that was reported after the launch. We do not have to wait long as we will get this update for free on December 8th on all of the platforms out there.

As any fan would be able to know here, Kate Bishop will be adding in some other fun ranged combat into the game as we head into a story that will take us through some time travel that the Avengers will have to deal with. Something that will play into Kate's heroic abilities and the new Omega Level enemy we will need to take down in the multiplayer modes. All of which to help find out what happened to Clint Barton, Hawkeye, and then lead into the next portion of the story next year. Something that will take the Avengers into the future where it looks like we could see some of the darker storylines from the comics into the gaming space. It looks like Maestro and maybe Sentinels will be out there in some kind of force. This has me excited to get back into the game yet again.

In terms of what Kate will be able to do in Marvel’s Avengers, it looks like all of her abilities will be around three different arrow types and some quantum particles that will allow her to teleport a bit. This looks like it will be her special traversal modes in the game as it does give her some short-range teleportation as well as the ability to reposition in the battle for a better attack. Something we will need to master as she will have a sword in the mix of it all to give some melee in the mix. I have a feeling that will be more how I go in the game given how the ranged weapons work in Marvel’s Avengers but maybe this will be different with the character and then Hawkeye next year.

Today, Square Enix announced that the first new playable Super Hero for Marvel’s Avengers will launch as part of Operation: Kate Bishop – Taking AIM on December 8, 2020. In addition to a new playable Super Hero in Kate Bishop and the new chapter in the game’s ongoing Avengers Initiative story, Marvel’s Avengers Operation: Kate Bishop – Taking AIM will also introduce a powerful new villain, the Super Adaptoid, that will challenge players with a combination of skills and weaponry that mimic the Avengers’ attacks.

The lead-up to Taking AIM began with enigmatic new Tachyon missions that started appearing on players’ in-game War Tables several weeks ago. In Taking AIM, Kate Bishop, master archer and skilled gymnast, resurfaces after her investigation of Nick Fury’s disappearance following A-Day leads to her mentor Clint Barton (aka Hawkeye) going missing as well. As she unravels the mystery behind the sudden appearance of the time-warping Tachyon Rifts, she uncovers a twisted new plan from AIM, which pushes her to work with the Avengers once again.

Taking AIM’s story begins shortly after the conclusion of Marvel’s Avengers’ Reassemble campaign and is just the first half of the two Hawkeyes’ Story Arc. Clint Barton’s Hawkeye will then take the stage in early 2021 to complete the double-feature and lay the groundwork for what’s next in the Avengers Initiative.

Did you think that we were going to see Kate Bishop join the Avengers before the end of the year or is this the surprise we needed for the game? Do you think that the story we are going to get here will be more robust than the character missions we have seen already or will it flow in that same way here? Where do you think the IP will take us and will we see some of those various other characters that are not known to be full team members and will the game soon encompass multiple aspects of the Marvel universe? Let us have those thoughts and feelings down in the comments and then feel free to discuss it all as you wish. When we have more to share for Marvel’s Avengers, we will throw it up on the site for you. Be sure to keep checking in for that and much more.