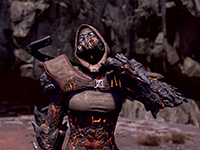 We had the tease for the final class in Outriders at the end of the last broadcast that was put out there. That would be the Technomancer class for those that missed out. Now we are back with the next broadcast from People Can Fly to highlight just what this class will be doing in a world where a good portion of the technology out there has been fried. It looks like they are going to be able to infuse and call in some of that lost tech in Outriders among being able to break some of the basic mechanics that the other classes have to abide by in general. Like having the option to change up one of their abilities based on pressing a button on the controller or holding it down. That and also being able to heal everyone else on the team instead of just themselves through a vampiric touch nature.

It looks like a whole lot of fun here for Outriders which will help the 40+ hours of gameplay fly by. Something that also helps beg the question of what is going to happen after we finish all of that as there is no planned expansion or DLC with this one being an all-in-one title unlike the nickel and dime games out there. It does look like there will be some end game content to play through which will be sections of the world that we will not be able to get to in the main story of Outriders. It is weird to call it "end game" instead of just part of the game, but it sounds like there will be some Expeditions that should only be done post the campaign and they will be locked off until you get to that point. You can get a short look at that in the following video we have here.

Square Enix is excited to reveal “Expeditions,” challenging post-campaign content for Outriders, the high-intensity RPG-Shooter where survival demands aggression, from People Can Fly, the developers of Gears Of War: Judgment and Bulletstorm, and Square Enix External Studios, the minds behind Sleeping Dogs and Just Cause.

Expeditions is an exciting post-campaign feature in Outriders that will challenge even the most accomplished Outrider and push them to their limits. Battle through a series of tough-as-nails missions and reach the highest challenge tiers to unlock the most powerful equipment in the game.

Outriders will release on PlayStation 5, PlayStation 4, Xbox Series X|S, Xbox One, and PC on February 2nd, 2021 and Google Stadia later in 2021.

How are you feeling about the Technomancer here in Outriders and do you like how they can flow between all the various roles with what looks like a bit more ease? Do you think that we will see some kind of expansion or paid DLC or will they be able to keep the promise while keeping us wanting more? Is it weird to call it "end game" content if it is just part of the game we have to progress to? Give us those thoughts down in the comments and then feel free to discuss it all if you wish. There is still a bit of time before Outriders releases and we will update you with everything as we get it. Just be sure to keep checking back for all of that and much more.