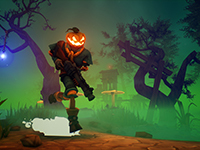 If you remember a long while back we had the announcement for another fun platformer that was on the way by way of Pumpkin Jack. It was a title I was excited for way back when Headup Games made the announcement for it and now it looks like we have the surprise of when it is going to launch. In fact, just as I assumed, it looks like Pumpkin Jack will be dropping on us all on October 23rd now. Well, at least for those looking to play the game on the Xbox One, Switch, or PC. I am not sure why we are missing a platform here now, but my guess is so that it could be out before Halloween in some aspects.

For those that do not remember, Pumpkin Jack is a new 3D Platformer that will have us playing as the titular Jack as he goes through all of the fun and cartoony world the game is set in. The best way to think about it is to look at tiles like MediEvil and Jak & Daxter just with a different character here. Pumpkin Jack does look like it could add in a few more hours of fun for us to have while we are stuck inside without all of the fun of the outside horrors. I know it will be on my list to go through when not doing all of the other Halloween things that we should all be doing by now. If only. If only…

Headup is thrilled to announce the release date of the comically creepy 3D platformer from developer Nicolas Meyssonnier, Pumpkin Jack. It will make its way to PC, Xbox One, and Nintendo Switch on October 23, and will please both fans of games like MediEvil and Jak & Daxter as well as everybody who’s looking for an eerie game to play around Halloween.

Enjoy engaging in an epic battle of evil against good as you jump, dodge, and carve your way through challenging enemies and daunting puzzles. Speed on roller-coaster-like rails in cartoony mine karts, escape dangerous situations like a giant burning barn and use your trusty owl companion for distance attacks - this won't get boring until the end screen appears!

Pumpkin Jack also shines by the use of Unreal Engine 4 which grants for gorgeously rendered and gruesomely colorful landscapes.

Did you forget about Pumpkin Jack before now or has it been on your radar since it was first announced? Was this one of those titles that was easy to assume would be out for Halloween or did you think it was going to be held up for other reasons? Do you think it will ever make it over to the PS4 or will it only be on the listed ones forever? Let us have all of those thoughts down in the comments and then feel free to discuss it all. If there is more to share for Pumpkin Jack, we will share it all here for you. Just be sure to keep checking back in for all of that and much more.