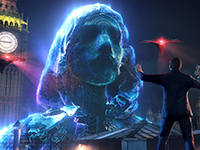 A new story trailer for Watch Dogs: Legion is here with news that post-launch content will feature more from Watch Dogs’ past

There always seems to be just something else going on in the world of Watch Dogs: Legion and that is what we have here with the latest story trailer to take in. We will still have those horrible heads of corruption in London that we will be taking down, but now it seems like there is and an even bigger threat that is just allowing these lesser ones to do their thing. Kind of a reverse conspiracy theory, if you will, as Ubisoft shows us Zero Day in the Watch Dogs world that is causing all of the issues out there. I am sure there will be a few other twists out there when we get the game, but the latest story we have now is that this is what is going on. Either way, it looks like it will be shaping up to be a fun romp through London with only a few surprises left for us to find.

You can see this story bit a little lower down if you are not too concerned about spoilers here. We have had a lot of Watch Dogs: Legion as of late so it may have been hard to side-step a lot of that. The more interesting thing here, though, is that we have more details on the post-launch content too. Like the fact that we will be seeing a free ONLINE mode added in before the end of the year with all kinds of Co-Op and PvP modes mixed in for this Watch Dogs outing too. Including the famous Intrusion mode making a comeback. Thankfully, there will be other new content and New Game + to help with any of that down the line too. Not that the intruders will not have access to the same thing, that is.

In the near future, London is facing its downfall. After devastating terror attacks caused by a mysterious entity called Zero Day rock the city, an all-seeing authoritarian state has oppressed the people, a corrupt private military corporation controls the streets, and a powerful crime syndicate is preying on the vulnerable. The fate of London lies with you, and your ability to recruit a resistance and fight back.

In addition to all of that content, there is a bit more on the Season Pass content too with another Watch Dogs character coming back in. In fact, we have a total of four characters joining in the game with Aiden already announced, Wretch will be back in and then two more characters that are yet to get the full details. One looks like a character made specifically for the Watch Dogs world where their transhuman nature allows for mind control of sorts. Then the big cross-over is happening with a full assassin from the Assassin's Creed side of things coming in. Not a named character we have seen in those titles, but one that is new and also fits the modern setting more than a historical one. That I am totally interested in here.

Get a first look at the Watch Dogs: Legion post-launch plan with the Year One Trailer!

Online mode, Season Pass and Free Content, discover what lies ahead, including the return of Aiden Pearce, from Watch Dogs 1.

Welcome to the resistance!

Have you been able to miss the story spoilers for Watch Dogs: Legion so far or have they been putting out too many videos that it has been hard to go in fully blind? Do you think that the online modes will be just as good as we saw the first time or will it be crammed with too much and thus overwhelm everyone? How do you feel about the two new DLC characters that will be coming in through the season pass? Let us all know down in the comments and then feel free to discuss it all. If there is more to share for Watch Dogs: Legion, we will have it up on the site. Just be sure to keep checking back in for all of that and much more.