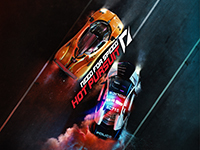 Some rivalries never seem to die, as it seems, and it looks like this is the reason we are seeing Need For Speed come back here for the PS4, Xbox One, PC, and Switch. Not in the way of a full new title, mind you, but in the way of a remaster from one from a while ago. Just in case you had any big rivalries you could not get over and drive you mad late into the night decades later. Get ready to be able to put them to bed with the announcement for Need For Speed Hot Pursuit Remastered. This would be the one we are talking about that is coming and will be playable with all of the DLC yet again. With all of the usual bells and whistles that go into a decade's old game.

For some reason if you are still holding grudges from back when the first Need For Speed Hot Pursuit came out, and are not still playing it in the first place, it looks like you can spark things back up on November 13th for the Switch gamers but a bit earlier on November 6th for the rest of the platforms out there. Given the proximity to the PS5 and Xbox Series X launch, it would be easy to assume it will be "backward compatible" for those too, but there is no word on that as of yet. Even if it feels like it would have been a better idea to drop a wholly new Need For Speed title here instead of an old one again.

Reignite the pursuit in Need For Speed Hot Pursuit Remastered, coming Nov. 6 on PS4, Xbox, and PC, and Nov. 13 on Switch.

Ever since, we’ve heard so many stories about the triumphant moments and heated rivalries Autolog fostered. Some of which run very, very deep. Like the one between Michael and Joseph.

Now, it’s your turn to feel the thrill of the chase and the rush of escape in NFS Hot Pursuit Remastered, arriving to PlayStation 4, Xbox One, and PC on November 6, and to Nintendo Switch on November 13!

Unleash a savage sense of speed both as an outlaw and a cop in this timeless racing experience updated for today’s platforms. With cross-platform multiplayer and Autolog, enhanced visuals, all main DLC delivered at launch, and much more, this is the ultimate version of Criterion Games’ critically acclaimed Need For Speed debut.

Have you been holding out for this remaster to come or would you have rather had a new Need For Speed title here? Is it safe to assume it will be going to the next-gen systems or will it be part of the 1% of titles that will not be making the leap? Do you still hold grudges over this game and will you be glad to try to put some of them to rest now? Let us have all of those thoughts and feelings down in the comments and then feel free to discuss it all. If there is more for Need For Speed Hot Pursuit Remastered, we will have it all here. Just keep checking back for all of that and much more.