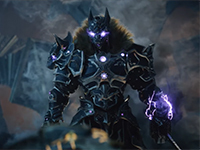 It is time to get cinematic here with a bit more for Godfall to take in. That and a bit more of the story and the Fall that has happened in the game that will be causing us to go through the story of it all. Yes, we will be flowing out there as a fallen being that is fighting to get back to where they were before. It looks like Counterplay Games could be mixing things a little bit different than we have from other titles from the publisher but I have a feeling Godfall will flow through the same motions as usual. Hey, we might need it all here when the PS5 comes out here.

As the video shows here, we will be playing as one of the fallen leaders of Aperion that has been ousted from on high and left for dead by a superior fighter. We will be gathering other knights out there to fight back against Macros here and most likely restore a balance back into the lands here in Godfall. Okay, it sounds mostly like many of these kinds of games out there where we are fighting to take back our power. Most likely from someone that is a megalomaniac and not looking out for the denizens of the world. Although, it would be interesting if this all was turned upside-down and we had something new to experience.

If I’d left well enough alone, Macros would still be bullying rivals and battling enemies. Instead, he’s on the brink of godhood and our civilization lies in ruins. But Macros forgets what he said to me that day: Gods belong in the sky.

Save Aperion. You are the last of the Valorian knights, masters of combat-equipped with legendary armor called Valorplates. Ascend in Godfall, a first-of-its-kind, looter-slasher, melee action-RPG.

Godfall launches on PlayStation 5 and PC via the Epic Games Store this Holiday 2020.

Are you pumped for the game after this new video here or are you seeing most of the same story getting retold here again? Do you think we could be seeing something different from the story in the final build or will it be the hero's journey as we always get? Does any of that matter and you have been excited for the game since we saw the first real gameplay? Give us all of those thoughts down in the comments and then feel free to discuss it all. When there is more to show for Godfall, you know we will have it up here. Just keep checking in for all of that and more.