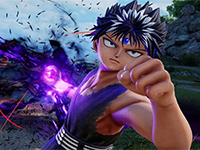 Here we go with the next character to join in on the fun of Jump Force as we have our first look at Hiei coming into it all. If you are not sure where the character comes from, as I know I was not, it looks like he is joining in from the depths of the YuYu Hakusho manga/anime out there. Not the most widespread or well-known in my book, but still a character that I am sure fans of Jump Force and the anime will be glad to see join in. Also, a great sign that it looks like more characters from lesser-known titles out there will get their day in the sun. Something I am sure will cause a stir with all of those fans out there that have been ingesting the content way longer than I ever have or will.

Given that I have very little knowledge of the source the character is coming from, I will not even try to postulate on what is going on with them in Jump Force here. I am sure fans of all of that will be able to tell just from watching everything. What I can share is that Hiei will be joining as part of the Character Pass 2 sometime in 2021 along with the other characters we can see here. Two more characters for Jump Force are still to be announced for this pass with one hailing from Bleach and the other from JoJo’s Bizarre Adventure. Now get ready for a nice little viewing of this character and just what you might be waiting for.

Arriving from the depths of Demon World, it's Hiei! Unleash your power on the battlefield and show them what happens when you mess with an S-Class demon.

Did you know of this character before the announcement into Jump Force or is it a deeper cut as it was for me? Do you like seeing these kinds of characters added in or will it only please a smaller base of the fans here? Who do you think the other characters that we will be getting are? Let us know what you are thinking down in the comments and then feel free to discuss it all. If there is more for Jump Force, we will share it here for you. Just be sure to keep checking in and educating yourself on it all as time marches on.