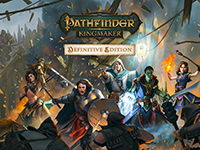 Pathfinder fans will soon be able to explore the definitive edition of Pathfinder: Kingmaker over on the PS4 and Xbox One this August

The time is finally here, as console gamers are going to get a chance to finally sink their teeth into Pathfinder: Kingmaker with a release of the game on August 18th over on the PS4 and Xbox One. Only about two years after Owlcat Games and Deep Silver brought it to the PC. There is no shame in that at all, just that console gamers had to wait and are now getting a definitive edition for Pathfinder: Kingmaker. Yes, that means all of the usual upgrades and DLC additions that the PC gamers had, but it looks like there will be a bit more. In fact, there is going to be a new feature mixed in that I wished was in the original release.

Shifting this style of game from the PC to console was going to have a bit of an issue with the control scheme but in this version of Pathfinder: Kingmaker we are getting a true turn-based system added in on top of the original pause system that they implemented. I have a feeling this is why the upcoming Pathfinder: Wrath Of The Righteous is going to have that mixed in the base game and I could not be more excited. That and the ability to go back and replay all of the DLC campaigns and the core one to try to build that perfect kingdom that I have yet to be able to build sitting around a table with dice.

Pathfinder: Kingmaker takes players on tour through the infamous Stolen Lands, the dangerous and turbulent territories well known within Pathfinder fandom. The computer RPG revisits familiar characters and well-known locations of the "series" lore and treats players to brand new adventures, deadly foes, and unforeseen twists and turns. Fans of the fantasy pen-and-paper RPG will experience its epic, heroic universe in new ways while computer RPG gamers will discover their favorite genre in a more contemporary light, in stunning 3D graphics that bring the universe to life.

Pathfinder: Kingmaker will challenge players as both adventurers and rulers as they claim explored lands and carve their kingdom from the wilderness. Kingdom founding goes beyond simple stronghold-building to become a true reflection of the hero’s character and choices made throughout the game. Each kingdom is a living thing shaped by alignment, choices, allies, and the hero’s ability to lead his or her people.

Were you expecting to see a console version of Pathfinder: Kingmaker at some point or is this a bit of a shock to have here? Have you been waiting for this new feature to be added into the game or is this the time you will be jumping into it all? Do you see all the same level of replay as I have here or will it still be a one and done for you? Let us all know down in the comments and then feel free to discuss. If there is more for Pathfinder: Kingmaker before or after launch here, we will add it all to the site. Be sure to keep checking in for all of that and much more.