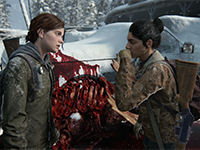 Just when we thought we were only going to be getting a TV spot this week for The Last Of Us Part II, we are back with the next developer diary for the game. Some of us forgot that Naughty Dog was going to be doing these all the way up to the launch on June 19th to give us a little more on what is going on in the game. This time around, it is a bit more on the world built for The Last Of Us Part II here and how it is still using many things from before but advancing as people would in these situations. At least the way we think they might even if the real world always seems to go much darker.

Here we get a few more looks at the different factions in The Last Of Us Part II and the locations they are all in. The more interesting one is Jackson here. Presumably the town we will be starting in here given what we can see. Also, it is a town that has forced its way back to what we have lost with safety and electricity. Everything we would hope for in the world of The Last Of Us. Even if it does have more and different types of infected to bring us and our loved ones down. Only made worse by the fact that we also get to see more of the humanizing of enemies in the game with dogs having names and humans having more personality over "random guard with a gun." This will make those kill shots much worse for many out there.

The Last Of Us Part II — Inside The World

Learn more as the team at Naughty Dog goes in-depth about the new locations, factions, and threats you’ll encounter in The Last Of Us Part II.

The Last Of Us Part II launches on June 19th, 2020 for the PlayStation 4 system.

Did you forget about these developer diaries for The Last Of Us too or were you waiting for this one to drop? Do you hate the fact that they are naming dogs and offering up faces to the normally faceless NPCs? Do you suspect that it could be the entire town of Jackson that gets wiped out and places our duo on their path or will it most likely be Ellie's main squeeze? Let us and the world out there know what you are thinking down in the comments and then feel free to discuss it all. If there is more for The Last Of Us Part II, we will certainly have it all here. Keep coming back to see and hear all of it as we get closer to launch.