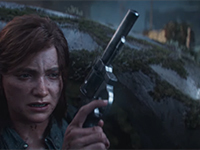 Now that we have had the nice big show for The Last Of Us Part II last week, it would make sense that we would not see much more until the June 16th here. So far Naughty Dog has done a great job at keeping it all well obfuscated to keep spoilers off the internet. That is why it is a little surprising that we have a new video for The Last Of Us Part II right now that shows off a bit of what can be assumed to be part of the story. It is all a nice cinematic and not the game running on the PS4, but it does look like some assumptions can be made and confirmed for the game here.

Outside of the speculation on why Ellie is out for revenge in The Last Of Us Part II, there is not much more than seeing how the action could flow here. It is all pre-rendered and cinematic, with zero gameplay here, so it does not spoil a single thing in the game at all. The interesting point is the focus on Ellie's bracelet here that further points to the fact that it is going to be here partner that is killed and she is out to strike back. Maybe she was only kidnapped here, but I think it is going to be much darker as The Last Of Us has always been.

The Last Of Us Part II — Extended Commercial

Watch the all-new extended commercial for The Last Of Us Part II launching on June 19, 2020.

As Ellie pursues vengeance after a traumatic event, she must confront the devastating physical and emotional repercussions of her actions.

Have you been able to keep away from any real spoiler for The Last Of Us Part II so far or have you been spoiled already? Do you think that this will have any impact on the game at all or is it all just to promote the violent aspect of it all? Do you think there is a chance her partner is just missing and not dead or would that be outside of the norm here? Let us all know down in the comments and then feel free to discuss it all. If there is anything more for The Last Of Us Part II, we will have it here for you. Be sure to keep checking in here. Hopefully, it will all be something of importance.