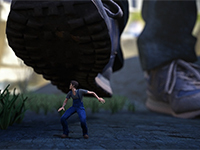 A new adventure title, MicroMan, has been announced with MicroMan giving us another feeling for how it would feel to be shrunk down

Things are getting small again with the announcement of MicroMan coming to the PC with a launch on the Switch, Xbox Series X, and PS5 to follow sometime after its initial launch in 2021. Yes, you read all of that right as we have another next-gen title coming out and this one is from Glob Games Studio. All centered around something we have just recently seen; being made small in a large game world. That is not to say that MicroMan is going to be a clone of anything, but it is weirdly something that is all the rage right now when it comes to announcements. It is another game to add in, though, so I will take it no matter how you want to feel about it all.

In MicroMan, we will be taking on the role of a lab worker that is at the wrong place at the wrong time and is shrunk down to the size of a large insect. Large enough to deal with all of the issues that would bring, but not small enough to really be called micro in my book. Given that there is a lot of humor mixed in for MicroMan here, I have a feeling that is going to be something played off for the laughs and everything. Especially when we will be able to ride a butterfly to explore the world and then wield a fork to fight an ant or hedgehog. I hope you are also seeing the humor in all of this as well. If not, have a look at the trailer below and get a feel for what we might be getting in this game.

MicroMan is a new game combining adventure, action, and survival that will allow you to look at the human world from a completely new perspective. As announced by the developers from the Polish Glob Games Studio, the release will offer very diverse gameplay and a crazy, humor-filled story. The PC launch has been scheduled for the second half of 2021, and later MicroMan is planned to appear on Nintendo Switch, PlayStation 5, and Xbox Series X.

The game is being developed with the single-player experience in mind. The release will combine, among others, elements of action-adventure, arcade and survival games. The main protagonist is a laboratory worker who, as a result of an unfortunate incident, falls into an experimental reduction capsule and gets shrunk to the size of a small insect.

The player's goal will be to find a way to return to his normal size. As the developers explain, the road to achieving this will not be short and easy, and the gameplay itself will be very diverse and include various interesting and surprising elements. The game will involve face-offs with powerful enemies (such as ants, frogs, and hedgehogs), unusual means of transport (e.g. a butterfly), thinking how to overcome obstacles and make sure the hero is in good physical condition. The creators have also announced that MicroMan will feature decisions that will directly affect the gameplay.

What do you think about MicroMan as it is all laid out here? Do you find it odd that we have so many small-sized games getting announced or shown off here or was that the weird cycle we are in now? Do you think that all of the oddness of it all will be played off for laughs or will it try to be taken seriously instead? Let us and the world out there know what you are thinking down in the comments and then feel free to discuss it. When we have more to offer up for MicroMan, we will have it all here. Be sure to keep checking back in for all of that and much more.