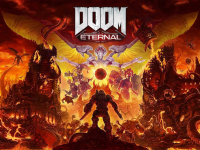 We sit down and review DOOM Eternal. The fast-paced, demon-killing, franchise is back with some new surprises. Here is our review of DOOM Eternal

Some of us are sanitizing our homes and others are Satanizing our homes with the launch of DOOM Eternal. The next big installment to the franchise from id Software that aims to keep us all knees deep in demonic viscera and gore. At least in a virtual way on the PC, Xbox One, PS4, and Switch. The DOOM IP has been a staple out there for first-person shooters and now we get to see if it is going to keep us entertained in these trying times or hoping for the good old days of other FPS titles. As you are sure to know right now, here is our review on how the game has handled for us.

It has been a rough two years for humanity after the events of the last DOOM title as the forces of Hell have corrupted pretty much everything. All to the point where it is hard to believe that 40% of the human race is still kicking it out there. Thankfully, the Slayer is back from parts unknown and with some badass weaponry to try to save the planet from its "doom." Will he be able to do so, or will it all end in the worst way we can all imagine. It is up to us to find out and grab that BFG to kill all of those Hell Priests hidden across the globe. There is not much that I found an issue with DOOM Eternal during my run, but that is not to say I did not come across a few things that detracted from this amazing title. The biggest culprit I found had to be with the deviation from the standard controls most of us are used to in FPS titles. The big one being that you hold the left trigger to scope in or look down the sights of the gun. This is not happening in most cases in DOOM Eternal, as it is what is used to trigger the various weapon modifications installed. Sure, after a few missteps you can get the swing of it, but it was an issue I found myself constantly retriggering along the way and thus wasting some of that precious ammo in the heat of it all. It is a learning curve that takes a bit of practice and retraining, but it was extremely frustrating in the opening hours of the game that it needed to be mentioned here.

To keep the ball rolling here, the only other true issue I seemed to run into during my time with DOOM Eternal had to be how the story was presented to the player along the way. Not that it was done in a horrible way, but given the chaotic and fast-paced nature of the title, it was hard for me to follow along with what and why I was going about my missions. Not the biggest of issues for many out there that enjoy DOOM but it was something I found myself always needing to question before going off to do it. Outside of it just being how the game is going to progress. If you have no big care for the overall story, then you can ignore this gripe and move right along. The biggest thing I have to say I loved, which somewhat ties into a gripe above, is the fast and chaotic gameplay that we have here in DOOM Eternal. You always need to be moving and planning ahead with almost no time to sit back and try to pick things off one by one. It is something I have been feeling a bit lacking in the FPS genre as of late with many games focusing on a slower-paced version of things. In general, at least. Here in DOOM Eternal, standing still will get you swarmed and killed with such a quickness that the thought should never cross your mind at all. More so when you realize that most of your health, armor, and ammo is going to be coming from the kills instead of strategic placements around the maps. It is such a stimulant to the mind that it sucks you right into the world that the game is trying to build without you even knowing it.

Of course, with that style of gameplay you are going to need some well-thought level designs to keep the chaos a bit controlled. Sure, that can be done, and is at times in DOOM Eternal, by reducing things down to a basic room. A true shining light in the game, though, is where id Software opens up the environment more yet still seems to keep all of the chaos controlled. Even without overuse of "demonic barricades" to lock things in. It keeps you focused in and yet always feels second nature to run around, jump, dash, shoot, and then repeat it all again over a vast map. All while not feeling lost in the mix of it all. I have had many issues with that in other titles, a big reason for my lack of love to play online, but here in DOOM Eternal it always felt right. So much planning and it truly shows here in the game.

Another fun thing to see here in DOOM Eternal that helps to add to and also cause the chaos, is the variety of weapons we have to use and how we need to use them. Even if they truly are only a set of eight main weapons we have in the wheel with various others that we can cycle through at the press of a button, they all had their uses and felt needed along the way. Never did I find myself questioning why I needed a specific mod or weapon as they always were used. This comes down to some great enemy design too, so we are forced to actually use the full arsenal and remember what works better on certain creatures. Hells, in some instances I found myself playing around with certain combinations to take down challenges in DOOM Eternal as a weapon you would never use on an enemy would seem to get the job done better in the shorter time. Just get ready to get to know them all and know them well before the end of the game.

Lastly, as I could keep going on well for days on DOOM Eternal, the upgrade progression and various collectibles mixed into it all need to be highlighted here. With all of the chaos I mentioned already, it might be hard to think that this is something needed in the game. All of them added in a nice pace shift when needed, an extra challenge when sought, and felt like it always was something needed and not thrown in just to pad the runtime. Even with the option to go back and replay missions to collect missed items, I always found myself wanting to do it on the same run so I could get the break I needed without having to put down the controller. Also, to make certain I was fully prepared for the next big boss that DOOM had for me. They never felt forced and it is hard to say that about many FPS games out there right now. Kudos on getting it correct here. Seriously, if you have even the smallest want to play DOOM Eternal, I say give it a go. Unless you are adamant about not playing FPS games or adverse to over-the-top violence, this is going to need to be a game you have in your library. Sure, it does break a few of the tropes that most FPS games use out there but most of those were in a very good way. The only drawback I found was needing to relearn how to play with some of the controller changes. Also, be ready to keep going back through DOOM Eternal if you are in it for the story. It is easy to get it lost in the chaos of the game. But given how much fun it is to play over and over, it is going to be worth going back to experience those parts you might miss out on.

I give DOOM Eternal 666 Glory Kills on the Glory Kill scale.

DOOM Eternal was developed by id Software and published by Bethesda for the PS4, Xbox One, Switch, and PC on March 20th, 2020. A PS4 copy of the game was provided by the publisher for reviewing purposes.