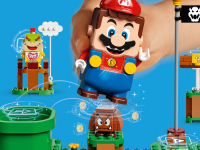 We had a nice little tease and there was a whole lot of speculation that we were going to get a LEGO Super Mario game out there, and now… we kind of are getting that‽ So, before you get all excited, we are not getting a video game in the same vein as we have for many other IPs out there. It would be rather cool to get something like that, but in terms of LEGO Super Mario, we are looking more at a "Toys To Life" kind of deal. Without the video game aspect being there. No video game but we are still getting the building blocks for it all.

So what are we getting here? Well, this is more or less a specialized LEGO set that is Super Mario themed. I say more or less, as it does not function exactly as all others with this one having sensors and LEDs in the blocks so we can not only build the levels but play them with our Mario characters. As the video will show, we can take Mario on our built little adventures and have him pounce and hit things for coins that will be tracked in the main toy. What this does besides some form of bragging rights, is still unclear. All we know for certain is what is laid out there and that we should be seeing this LEGO Super Mario sometime in 2020.

The LEGO Group announced a partnership with Nintendo that will change the way people interact with Super Mario in the physical world and engage in LEGO experiences.

Both companies share a passion for innovation and play and their collaboration has led to a reimagination of the LEGO building experience, enabling an entirely new way to play inspired by the beloved video game icon, Super Mario.

Neither a video game nor a traditional LEGO brick-based set, LEGO Super Mario is a new product line that features an interactive LEGO Mario figure who collects coins in real-life game levels created with LEGO bricks. The new line will let kids experience the playful world of Super Mario like never before. Super Mario will be brought to life in the physical LEGO world and new levels of challenge and styles of play will be part of the iconic LEGO experience enjoyed by generations.

The video, which hints at what fans can expect when LEGO Super Mario launches later this year, shows a player using an interactive Mario figure to collect coins in a real-life game level that has been created with LEGO bricks.

Were you hoping for a full-on LEGO Super Mario video game here or did you have a feeling it was going to be a special playset? Did you expect it to have interactive parts to it all or is that a bigger surprise than anything? How do you think it will keep true count of the coins for those going through it all or will it be an honor system kind of thing for kids? Let us have all of those thoughts down in the comments and then feel free to discuss. If there is more for LEGO Super Mario, you know we will have it here on the site. Be sure to keep checking in for all of that.