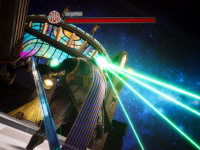 Last year, PC gamers had a chance to dive into the world of Swords Of Gargantua to see what this rogue-lite action game was all about. This, obviously, left out a large chunk of gamers out there that have been looking for something along the lines of a realistic sword-swinging game. This most likely partly why Yomuneco has put the work in to make sure that those with a PSVR will not be left out. Yes, this does mean that Swords Of Gargantua will be making the jump over to the PS4 in this form. All of which you should have gathered from the headline and the like. It was kind of laid out there for you.

As you can see in the trailer below, Swords Of Gargantua will have us fighting our way through various encounters using virtual swordplay that looks to be based on the real-world versions. It is hard to dictate that as swinging a sword is different between each human out there, but the game does state that it is a hyper-realistic version of it all. Maybe this will let us all learn how to actually swing a sword and not pretend while swinging a bat. That would be interesting to see here for Swords Of Gargantua and the way the PS Move controls are designed. Hopefully, we will not have to wait until the last day of Spring to know for certain.

Swords Of Gargantua is a fast-paced rogue-lite action for game 1-4 players featuring realistic swordplay in an immersive VR-enabled online environment. Players must level up their sword-wielding skills against a horde of enemies, and ultimately face their master, the towering titan named Gargantua. Fight solo or join with up to three others in online co-op, mastering your swordsmanship in blocking, parrying, and attacking, as well as your fighting strategy to defeat the mighty Gargantua!

Are you interested in seeing how Swords Of Gargantua lines up with real combat or is that something you would rather have be automated in your games? Do you think there will be more to the positioning than just swinging for the fences every time? Will it make a successful port over from the PC after so much time has passed since it first launched? Let us and the world know what you are thinking down in the comments and then discuss. If we have more to share for Swords Of Gargantua, we will share it all here. Just be sure to keep checking back in for that and much more.