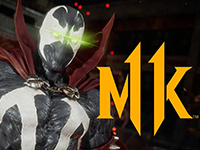 The DLC that many of us have been waiting for when it comes to Mortal Kombat 11 is almost here. It could just be me, but I know Spawn is the one character I have been waiting for some time now to just come to the franchise and I was over the moon when it was announced he was finally coming. Now it looks like NetherRealm Studios is ready to give us the Hellspawn on March 24th. March 17th for those who picked up the Kombat Pack for Mortal Kombat 11 already on the PS4, Xbox One, Switch, or PC though. This is the big one here…

Along with the release announcement, we have new gameplay to show off just how Al Simmons will function in Mortal Kombat 11 and all of the gear he will be bringing over from the comics. Crazy enough, it looks like he is bringing a whole lot of his attacks, weapons, gear, chains, and cape over with all being used. Something I did not expect to fully happen here but it is. Words cannot express how excited I am for this DLC to hit Mortal Kombat 11. More so when you see that Jacqui is also getting a nice Hellspawn costume to wear as well for those that want She-Spawn out there. So very exciting.

Spawn was formerly Al Simmons, the U.S. government's greatest soldier, and most effective assassin, before being mercilessly executed by his own men. Resurrected from the ashes of his own grave in a flawed agreement with the powers of darkness, Simmons was reborn as a creature from the depths of Hell – a Hellspawn. Now, he is thrust into the world of Mortal Kombat 11, where he will fight for supremacy against all Kombatants.

Spawn is voiced by actor Keith David, the original voice actor from “Todd McFarlane’s Spawn,” the Emmy award-winning HBO animated series. The new guest character will join the Mortal Kombat 11 roster on March 17 as part of the early access period for Kombat Pack owners, followed by wide availability on March 24. Is this the DLC that you have been waiting to hit Mortal Kombat 11 or do you not care about Spawn here? Are you surprised to see that so much of the character is making the jump over to the game or did you think it would be a few cape and chain moves with not much more? What do you think is other fatality will be in the game and how brutal with the Brutalities look in the game? Let us all know down in the comments and then feel free to discuss it all. If there is more to share for Mortal Kombat 11, we will definitely share it all here. All you need to do is keep checking back in for that and more.