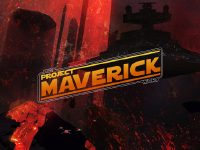 There are rumors out there now that we could be seeing the next Star Wars title sometime in the near future. I am not talking about the one in development to follow up Fallen Order that is already in the works, but a completely new title. That is based on the basics of what is out there with this rumor as it could all be a working title. That does not change the fact that there is some speculation out there for a new Star Wars: Project Maverick that has popped up on the internet. Something to take with some grains of salt, sure, but it is out there and it is possible it is all an early leak out there.

This all comes from a Twitter bot account out there that is tasked to keep tabs on PS4 game releases. Earlier today, which you might still be able to see below, it popped up Star Wars: Project Maverick as being added to the European PSN and offered up some key art with it. This is not a specific announcement nor anything solid to truly go on, of course, but it is something worth taking note of. Especially since there have been bots in the past that had the announcement of Resident Evil 3 about a week before the official announcement. Maybe this means we will see a new Star Wars announcement next week or sooner. The game Maverick has been added to the european PSN! pic.twitter.com/H0wmojX4S1

Do you put any stock in this new Star Wars announcement or could it all be one big hoax to get the internet stirred up? If true, do you think we are going to be heading to Mustafar given the key art or could it all just be stylized with no true point of reference? What would you want in a fully new title in the franchise? Let us all know down in the comments. If Star Wars: Project Maverick turns out to be anything, we will update you here on the site. Keep checking back for all of those updates in the future.