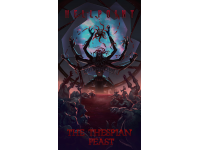 Recently, we all caught wind on when we would be seeing Hellpoint hitting the PS4, Xbox One, Switch, and PC. Do not worry, that date is still set for April 16th. If you are not willing to keep waiting that long, though, it would seem that Cradle Games and tinyBuild are looking to offer up a bit of the horror early. As in, you can go out and download something now and be playing it in the amount of time it takes to download and install. Here we are talking about Hellpoint: The Thespian Feast that has dropped over on Steam for all of you PC gamers out there. It looks like the other platforms are going to have to wait still.

Yeah, it is not every day that you get a little treat like this, even if the story here for Hellpoint: The Thespian Feast is a bit odd. Odd as in the fact that it is a sequel to the game that we are still waiting on to drop and takes place well outside of the events of the core game. Fifty years after the events to be specific. It does, at least, offer us a look and feel for the gameplay we can expect in Hellpoint before launch. Even if it does sound like it could spoil how the whole story of the core game is going to play out. I mean, if there is a sequel chapter to the game out there, then all of the events from before have to lead to it all in some way. Then again, maybe that is part of the fun…?

In a surprise announcement, publisher tinyBuild and developer Cradle Games have released Hellpoint: The Thespian Feast today as a free download on Steam.

The Thespian Feast is a sequel chapter to the original Hellpoint that features a new protagonist and takes place many years after the original.

Hellpoint is an intense, dark sci-fi RPG set on a derelict space station orbiting an ominous supermassive black hole. Taking inspiration from games like Dark Souls and Dead Space and movies like Event Horizon and Hellraiser, Hellpoint is doubling down on co-op multiplayer (with both split-screen and online support) while immersing players in a twisted narrative involving Cosmic Gods, quantum physics, and extinct space civilizations.

What are you think about this sequel chapter in Hellpoint: The Thespian Feast? Does it make sense to drop something that happens after the core game well before its launch or will it all make sense when we play it? Are you curious as to why they did not go with a prequel chapter to show us the gameplay and build up to the April launch? Let us all know down in the comments and then feel free to discuss it all. If there is more for Hellpoint, we will share it all here. All you need to do is keep checking in with us for all the weird and bizarre news.