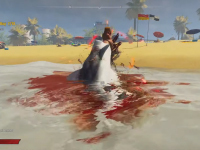 Get ready to dive right into a lot more for Maneater, as we have a nice and long look at more of the game's story that we will get to experience. Given how it all flows here, it is easy to assume this is from the opening of the game with all of the tutorial-like missions and such. It could also be just a slice of what Tripwire Interactive has up their sleeve in terms of how we will progress from "level" to "level" in the game. Even with the progression system of Maneater laid out from before, it would be interesting to see if each of the different hunters are working toward a different iteration of the shark each time now. You will better understand where we are going with this just below.

In this footage, we get to watch as a grown and adult version of the shark takes on the basics in Maneater and the start of the reality show following along with it all. This includes all of the fun of terrorizing the beach until Scaly Pete shows up with his crew and tries to take you down. The interesting part here is that it all cuts to Pete taking the shark down without a fight. This could just be how the footage is edited here, but it could also be that we are playing the offspring of the tutorial shark in Maneater and possibly how we will evolve in the game or handle deaths and respawns. That would be an interesting take on things even if we have to suspend a bit of disbelief in a game about a shark that can defy all other forms of logic. I jest…

Check out this clip from the opening moments of Maneater, the open-world RPG (or Shark-PG as its developers like to call it) from Tripwire Interactive. In this clip, a large adult bull shark goes head to head against a group of hapless beachgoers and meets Scaly Pete, a Cajun shark hunter and star of the titular Maneater reality show.

Are you more excited for Maneater after getting a bit more of a taste of the game? Do you think this will be just how we are thrust into it all after the tutorial or will the spawn of the shark play a larger role in the gameplay loop? What are you excited to get to do in the game here based on what we have seen thus far? Let us all know down in the comments and then discuss until May 22nd when the game hits the PS4, Xbox One, and PC. For more on Maneater, be sure to keep tuned in here on the site. We will grab all that we can and bring it to you here.